Home>Andrology (men's disease)>Hydrocele: the mechanism of development and methods of treatment

Hydrocele: the mechanism of development and methods of treatment

In some cases, hydrocele (hydrocele) requirestreatment, and in which it is better not to touch it? On the mechanism and characteristics of this disease, as well as its methods of treatment you will learn by reading this article.


Types and mechanisms of testicular dropsy

Hydrocele, hydrocele or hydrocele - a disease in which the accumulation of fluid between the sheets of egg shells.

Acquired hydrocele occurs wheninflammatory diseases of the scrotum, scrotal and perineal trauma, violation of lymphatic drainage from the scrotum. Sometimes a hydrocele can be reactive inflammatory processes in the testes or epididymis or testicular torsion. This hydrocele disappear with the disappearance of the underlying disease.

Adrift distinguish between acute and chronic dropsytesticle. Usually hydrocele is not accompanied by pain. The liquid in the shells of eggs can accumulate very slowly, in some cases, fluid accumulation can go jumps. When hydrocele in the scrotum can be felt education pear-shaped, the base of which is at the bottom and tapered tip is directed to the inguinal canal.
Sometimes fluid can enter the inguinal canal. Then hydrocele may take the form of an hourglass with a constriction in the external inguinal ring. Dimensions hydrocele may be different: from small increases in scrotal size to spherical education with a soccer ball size. Pains at a palpation more often does not happen. The skin of the scrotum remains unchanged, easy shifts. Hydrocele palpated as a dense elastic formation. With a large amount of hydrocele, it can become an obstacle to sexual intercourse, sometimes have difficulty urinating. 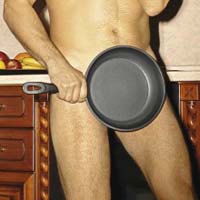 Diagnosis of hydrocele is set byTesticular ultrasound and transillumination. When ultrasound are the accumulation of fluid between the shells of eggs and egg unaltered. Transillumination - a method based on candling. When all hydrocele formation is illuminated uniformly. Sometimes a hydrocele cavity haemorrhage due to injury or severely punctured the blood accumulates in it. This condition is called haematocele. With the penetration of infection and the formation of festering there piotsele. Contaminated hydrocele occurs more frequently with epididymitis and orchitis as a result of infection with an abscess of testis or epididymis.

Treatment for inflammatory hydrocelediseases of the testis and epididymis it is to treat the underlying disease: the appointment of antibacterial therapy, rest and wearing a jockstrap. To remove fluid from hydrocele hydrocele puncture is performed. Wherein the liquid is removed and introduced into the cavity of sclerosing agents. This method of treatment can be complications.
When a failed puncture the shell egg may bedamaged, there is bleeding and the blood accumulates in the cavity of a hydrocele. Sometimes a hydrocele cavity may be entered infection and inflammation occurs. A radical method of operation is considered the treatment. When hydrocele performed two types of surgical interventions.

Operation Winkelmann. This surgical intervention is one of the sheets of their own shell eggs dissect the anterior surface, turn inside out and stitch the back of the testicle. This accumulation of fluid is no longer happening.

Operation Bergman. Part of the inner layer of their own egg shell is removed, the remainder of the cross-linked. Postoperatively appointed antibacterials and wearing for some time jockstrap.