Almost always hemophilia occurs only in males, andit proved about the people of every race and social status. The disease is transmitted are women who do not have blood clotting problems. Let's understand, why so?

Almost always hemophilia occurs only in males, and it proved about the people of every race and social status. The disease is transmitted are women who do not have blood clotting problems.

Often the disease is diagnosed in children aslong until they begin to crawl and walk. Unavoidable in this period of development of the child falls and collisions with objects can cause bruising of the skin and bleeding from the lips and tongue.

At the age of 2-3 years old boy with bleeding(Hemorrhage) may be affected muscles and joints, which is accompanied by painful swelling or limited hand movements or leg. If at this time injections administered (injection) by intramuscular injection, as usual, this can lead to extensive bruising depth that can be dangerous. It is important for a child with hemophilia be vaccinated, however, the safest thing you can do it subcutaneously. 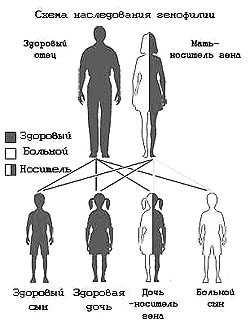 The human body is composed of a plurality of cells. Each cell has a regulatory center called the nucleus: it contains chromosome pairs forming filamentous structures. These structures determine the development of the individual characteristics of each person.

The most obvious characteristic of a person - isit belongs to a male or female, and the manifestation of this trait affects the chromosome. The one pair of chromosomes that determines the sex of the person, called chromosomes, sex, and they are also marked with the Latin letters X and Y. Women cell contains two X chromosomes (XX) and males - one X- and one Y-chromosome (XY).

A child inherits from each of theparents on the same chromosome, which determines gender, and the result is likely a combination of four chromosomes derived from parents (define two female and two - men).

Each chromosome is composed of a plurality of units,called genes, which determine how the body functions. In addition, the X chromosome that determines the gender of a person, it is also responsible for the formation of blood coagulation factors VIII and IX.

Those who suffer from hemophilia, these genesproduce enough blood coagulation factors VIII and IX, to which explains the birth of a boy with severe bleeding in different generations of the same family. At the same time, women of the same family do not suffer bleeding because their second X chromosome is the production of sufficient factor required.

In men, (a set of chromosomes X and Y) Y-chromosomedoes not participate in the production of factor VIII and IX. If a boy inherits the damaged X chromosome from his mother, he will suffer from prolonged bleeding, as its Y-chromosome can not compensate for the failure of the X chromosome to provide a sufficient number of factors VIII and IX.

If a woman is pregnant with a girl, there is aone chance in two that the child will be handed over to the hemophilia gene, and then the sons of the girls in the future will be born with the disease of hemophilia, and daughters will be carriers of the damaged gene. In other words, there is one chance in four that the pregnancy will be allowed a boy with hemophilia.

If the father is suffering from hemophilia, while all hisdaughters will be carriers of the disease. His sons did not inherit the disease, they will have a sufficient amount of blood clotting factors, and they will not transmit the disease to their children with hemophilia.

If a man is suffering from hemophilia marriesa woman who is a carrier of the disease, it is likely that they have a daughter, who suffers from hemophilia. This is especially important to remember in those cases when it comes to marriage between close relatives, such as cousins.

What tests are used for the detection of haemophilia 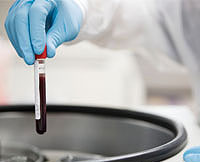 All analyzes were performed only in specialized laboratories.

If the results of the analysis show that the womanlow levels of clotting factor, this would indicate that she was a carrier of hemophilia, however, if the analyzes point to a normal level of factor, it does not exclude the probability that she is a carrier of the disease. Approximately 85% of the carriers of hemophilia can be identified by the analysis of family history, blood clotting factors and protein composition of these factors. However, the results of these tests are not considered as absolutely reliable, and they should be interpreted as probable.

Currently, the most accurate possibleestablishing carrier by direct gene analysis (DNA testing). To his conduct, you may need blood samples of the patient with haemophilia, as well as several family members. If you can not perform the test at the place of residence, the blood samples can be sent to the hospital laboratory, where conditions allow for DNA analysis. It is important to understand that the results of this analysis should be interpreted expert in the field, able to fully explain to the woman that wants to know whether it is a carrier or not. The analysis does not provide absolute proof of carriage, and often only an estimate of the probability of risk can be given, not a definite answer.

Even if the boy observed abnormalbleeding and among his relatives have hemophilia, an accurate diagnosis can be put only in the case when the level of clotting factors will be assessed. This analysis should be carried out in the clinic laboratory, where there are appropriate conditions and the experience of such tests.