disease
by admin
Toxic epidermal necrolysis called extremely severe skin lesions. This disease can even endanger human life. It is characterized by the rejection of the surface layer of the skin from her inner layers.

This process leads to pathologicaldisruption of the normal digestion of proteins by the body. In addition there is improper removal of decay products of protein from the body. Similar pathology leads to the fact that in humans accumulate harmful toxins, and operation of the system is disturbed excretion of harmful substances. In this case the patient's condition is rapidly deteriorating. In general, statistics show that death in this disease occurs in every third case. 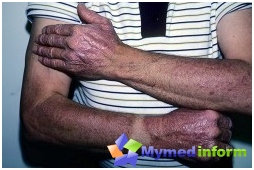 The syndrome may occur for several reasons. And depending on these reasons, today there are four variants of this disease. The first option is an allergic reaction to certain infectious process and different severe. And most often it is caused aurococcus the second group. This type of disease most often develops in childhood.

The second variant of the syndrome - a medical. It develops from the use of certain medications. These drugs, in particular, antibiotics, Anticonvulsants, sulfonamides, analgesics, acetylsalicylic acid, anti-inflammatories and drugs used to TB treatment. The most common abnormality develops due to the fact that the patient is at one and the same time, taking multiple medications, among them sulfanilamide.

The third type of disease - idiopathic, causesoccurrence of which remain outstanding. With regard to the fourth embodiment of the syndrome, it is caused jointly by several reasons. These include infection and medication. This variant of the disease usually develops in the treatment of infectious diseases. 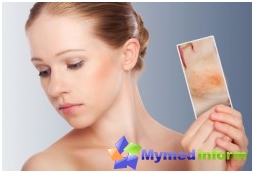 Getting the disease often manifests itself in the form of a sharp rise and causeless temperature Body 40 degrees. At the same time the patient begins fever, during which the mucous membranes of the mouth and genitals disease spots appear. Similar spots occur on the local skin. Dimensions of spots is not uniform. This all happens in just a few hours. Approximately twelve hours like formations begin to appear on areas of skin that seemed healthy. Perhaps even exfoliation of the epidermis. During the progression of the disease, on the body of bubbles formed with thin walls. Their size ranges from a diameter the size of the middle buttons up to 15 centimeters. Once opened, these bubbles are formed in their place, large ulcers, which are surrounded by reddened and swollen skin. The danger of erosion is that they emit quite a lot of bloody serous fluid, which in turn leads to rapid dehydration of the patient.

During the development of pathology occurspeel of the epidermis due to a non-existent effect on the skin. It reminds Nikolsky sign. It is noteworthy that in the field of compression and friction blisters are usually not formed, and immediately formed ulcers. As a result of the rapid process of the skin is almost a day and are very painful blush. Outwardly, it looks like burns second or third degree. In addition, the patient's skin when touched momentarily flattened and shifted. Sometimes the patient's body is still covered with petechial rash. It was also noted that in childhood the syndrome starts its development with signs conjunctivitis. At the same time your child has an infection of staphylococcus skin.

In the course of the disease affects the mucous membranes. They are superficial and painful education. Sometimes even small touching them from their blood may appear. Such lesions usually occur on the mucosa of the larynx, eyes, throat and oral cavity. They also can form on the mucous membrane of the trachea, bronchi, stomach, intestine, bladder and urethra.

The state of health of the patient at the beginning of the disease quickly worsens. Patients going strong dehydrationThat manifests itself in the form of complaints was very thirsty,pronounced sweating and dry mouth. Because of dehydration the blood becomes thick and poorly fed to the internal organs. Because of this, normal operation is impaired lung, liver, heart and kidney. In addition to these symptoms to begin with Lyell's syndrome is characterized by complaints of severe drowsiness, headache and the loss of spatial orientation. Sometimes ailment joins a secondary infection. When conducting diagnostic assays in urine observed the appearance of albumin, protein and blood. Definitive diagnosis using information based on the results of a survey of the patient and his relatives, clinical and laboratory data obtained. It is important to distinguish the syndrome from exudative form of bullous erythema multiforme, pemphigus and other types of acute inflammation of the skin. 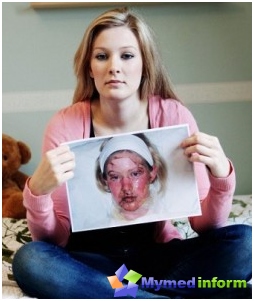 Patients with symptoms of Lyell's syndrome need tohow to be hospitalized in intensive care as soon as possible in order to cope with endogenous intoxication and impaired homeostasis, as well as to maintain the protein, water, electrolyte balance, and to maintain the normal operation of the important organs of life. In the treatment in the first two days of the disease extracorporeal hemosorbtion used, which is effectively remove various toxins from the blood. To interrupt the progression of the disease process, usually only two or three sessions. If treatment is to be started later, it may require more procedures.

Also in the complex treatment hemosorptionplasmapheresis is used, which is required for detoxification and normalization of immunity of patients. To relieve the process is usually only two or three such sessions.

A very important step in the treatment is to supportin the patient's electrolyte, water and protein balance. For this set of measures carried out with intravenous fluids based on dextran, saline solutions, and plasma albumin.

In addition, patients on a daily basis an inhibitor of proteolysis, nefroprotektory, gepatoprotektory and special antibiotics.

In the complex treatment of this disease is also often used corticosteroids by injection and inhalation. The dosage of these agents can vary depending on the severity of the disease.

In the process of finding a patient in officemonitored the work of his cardiovascular system. It is important that it was not cold in the room, and that it was equipped with bactericidal lamps. In addition, it is recommended to use a warming cage. To the patient is shown a liquid food, drinking plenty of fluids, the use of clean linen and sterile dressings. To accelerate the healing of ulcers is carried out one-week course of hyperbaric oxygenation procedure, in which the patient is located in a pressure chamber with oxygen under high pressure. Besides topically applied special sprays, aqueous solutions of aniline dyes methylene blue, as well as special ointment.