medicine
by admin
Many people in the summer months, go on vacationto the sea or to other interesting excursions. The body of the adult and the child reacts differently to changing environmental conditions. In unfamiliar terrain, there are differences in the water and food, the use of which in some cases leads to the so-called traveler's diarrhea. To avoid problems with the intestines to help Enterofuril. 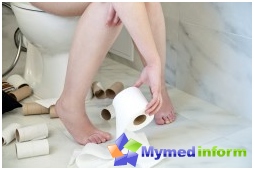 Most gastrointestinal infections,provoked by violations of sanitary norms, are common in the so-called third world countries and those states that were previously part of the USSR. The local population is also exposed to the negative effects of bacteria, but since childhood, they gradually develop immunity to them, so they become infected much less often. The causative agents of intestinal infections enter the body of travelers when drinking water, drinks and eating poorly washed fruits, berries, vegetables, and other foods that have not been cooked enough. And the heat creates very favorable conditions for the propagation of pathogenic flora. Many felt for themselves what is diarrhea travelers. This frequent stools, usually a liquid, abdominal pain, nausea and vomiting. And then instead of the planned excursions person is forced to constantly go to the toilet, but instead of deck chairs to lie in bed. The best prevention of bowel disorders - vigilance and restraint in the choice of food and beverages, following the rules of personal hygiene. 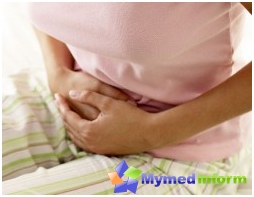 The pharmacological action of the drug is directedon the elimination of diarrhea. And all thanks to the antibacterial properties nifuroxazide, a wide range of its effects on pathogenic and opportunistic pathogenic microorganisms, is the culprit of intestinal disorders in both adults and children. Here are the names of just some of them - streptococci, staphylococci, E. coli (pathogenic strains), Salmonella, Shigella, Clostridium, Proteus, klepsiella, Yersinia, Vibrio cholerae, Enterobacter, Campylobacter. These germs often provoke the development of intestinal infections. Another positive quality Enterofuril - bacterial resistance to this drug is practically not developed. Moreover, the normal intestinal microflora under the influence Enterofuril not suffer. The phenomenon of dysbiosis while taking Enterofuril arises. The effective area of ​​medicine - the gut, it performs its functions without being absorbed into the bloodstream. This allows you to assign this tool even infants.

Enterofuril used in the treatment of diseases such as:

The suspension is still recommended, if a person has a chronic disease of the digestive tract, which are caused by bacteria. These diseases occur with pronounced symptoms of indigestion such as belching, Flatulence, alternating constipation and loose stool. 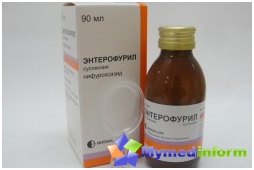 This medicine may be used in any convenienttime for you - after eating, before eating or during meals. The food will not reduce the therapeutic effect of this medication. But if you take more Polyphepan, smectite, Enterosgel, Activated carbon or other chelators, it is necessary to take Enterofuril or two hours after they or one hour before them.

The capsules are intended for adults or children,which is already more than three years. They must be swallows whole, none of them shaking. Then wash down with water (boiled). Permission is granted to use zapivaniya compote or juice. Adult or child, whose age is more than seven years, it is necessary to take four times a day 200 mg Enterofuril. Children from three to seven years give 200 mg of the drug (2 "Enterofuril 100" capsules, these capsules are smaller) three times a day.

Before you take the suspension Enterofuril,Shake bottle previously. Measuring spoons can measure 2.5 or 5 ml of the syrup. If it is necessary to measure other quantities, then convenient to use a volume of 5 ml syringe (without needle).

The dosage depends on the age:

It is desirable that techniques held between equal amounts of time. For example, if the drug three times a day appointed, the drink it every eight hours.

Treatment may continue for two to seven days. If within 12 hours of liquid stool is observed, this means that reception can be stopped. The contents of the vial after his autopsy can only be used 14 days. If the suspension is left, then use the next time it can not be after that date.

During treatment should refrain from drinking beverages containing alcohol.

Since Enterofuril able to deliver only onvarious intestinal infections and diarrhea, but not from dehydration, it is necessary to compensate for the shortage of fluid and salt in the body, even taking solutions for rehydration. The drugs available over the counter. Here are the names of some of them - Regidron, GIDROVIT, Trisol, tours and others. These products contain the body needs for normal salt of life, the loss of which occurs in the liquid stool. These electrolyte solutions give infants from the bottle. If diarrhea occurred in women who are pregnant or breastfeed your baby, the doctor can prescribe it to treat Enterofuril. 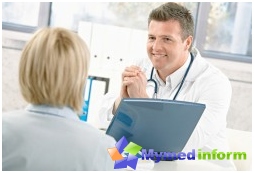 The drug is contraindicated in:

It should be remembered that the capsule can be given to children only from the age of three, buying in a drugstore "Enterofuril 100" (he capsules smaller, easier to swallow a child is them).