To get photokeratitis, just enough20 minutes of sun exposure, and to our eyes cornea danger is not only the direct rays, but also reflected from the surface of the earth. How to protect yourself from this trouble, see this article.

This is a dangerous sun 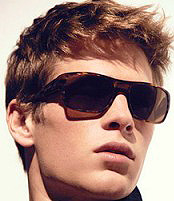 According to the study, every secondItalian buys sunglasses based solely on aesthetic considerations. At the same time such factors as eye protection from UV radiation is not significant for him. At the same time the survey showed that 80% of consumers have ever heard of that in case of insufficient protection of the sun's rays carry with them a threat to the eyes, but that's the question, what kind of the respondents found it difficult to answer.

To remove the veil from the eyes of the population, ItalianNational Research Center under the supervision of Dr. Gaetano Zipolite conducted a study whose purpose was to study how dangerous to stay in direct sunlight, and whether the protective umbrella or an awning to protect from the harmful effects of ultraviolet radiation.

The study confirmed that the risk ofare primarily ultraviolet light whose wavelength is 280-320 nm, and c rays wavelength 320-400 nm. Most short-wave radiation is completely blocked by the ozone layer of the atmosphere. Note, however, that every year the ozone layer due to the active business person becomes thinner, thereby reducing the ability of the atmosphere to delay ultraviolet rays.

A series of experiments was conducted in which 30June 2004 in Tuscany measured ultraviolet radiation throughout the day - from six in the morning until seven at night. A radiometer was installed under the protective awning, and the second - right on the beach. Further experiments were carried out in March on the ski slopes. The findings have been used by scientists to analyze the effects of ultraviolet radiation on the skin and eyes. To those effects, in particular, it relates photokeratitis.

What is photokeratitis? This is a very painful sunburn of the cornea, which Symptoms usually occur 6-12 hours after exposure.

"The danger is not only directsunlight - the harmful effects of having and reflected from the surface UV, as well as diffuse radiation, "- said Dr. Zipolite. The snow surface reflects 80% of UV-radiation (especially in March), a white sand beach - up to 40% of the radiation. Parasol at the same time protects only from direct sunlight (93%).

As the German magazine "Augenliht"the ability to reflect ultraviolet light may have not only water or snow, but even the pages of the magazine, which take vacationers to the beach: in bright sun white paper reflects UV rays, and they directly fall on the retina. Thus, sunglasses are necessary not only for active sports in the water, but even when reading at the beach.

On a cloudy day, a person develops a falsea sense of security, but the ultraviolet rays act on his eyes in any weather. But even those people who usually use sunglasses in sunny weather, consider that, when the sky is covered with clouds, it is not necessary. This is a big misconception.

Scientists of the following data were obtained: for the appearance of symptoms is sufficient photokeratitis very small doses of ultraviolet radiation. Danger photokeratitis get there after about 20 minutes of sun exposure in a horizontal position.

People still do not realize that ultraviolet light can adversely affect not only the skin, which is fraught with sunburn, premature skin aging and skin cancer, but also to the eye.

Photokeratitis can be avoided. Risks of exposure to ultraviolet radiation and, therefore, its consequences can be countered only through sunglasses. It is important to know that not all sunglasses can protect your eyes.

The use of glasses with cheap lenses withouthaving a protective filter, it can only hurt, because toning only protects the eyes from excessive brightness, but not from UV rays. The lens of the eye performs a natural healthy function of the filter.

Wearing glasses with tinted lenses, but withoutfilter, we lulls the vigilance of our natural eyes, believing that they are protected dark veil of points as a result of the pupil reacts to low intensity light extension, providing even more penetration of ultraviolet radiation to the retina of the eye. Mandatory requirement to be met by sunglasses, - availability of high-quality filter, whose task - to protect the eyes from excessive sunlight and harmful UV rays, reduce eye strain and improve visual perception.

Filters are selected based on the level of foreignillumination and individual sensitivity to the human world. An important criterion in the selection of sunscreen - a feeling of comfort, because each person's need in light of the individual.