Gynecology
by admin
Many women who are diagnosed with "erosioncervical "in no hurry to be treated or, worse, self-medicate. And he and the other option is potentially dangerous to health, and sometimes a woman's life. What is this such a common and serious disease and what are the methods of its treatment - article our site.

Many women who are diagnosed with "erosioncervical "in no hurry to be treated or, worse, self-medicate. And he and the other option is potentially dangerous to health, and sometimes a woman's life. What is this such a common and serious disease and what are the methods of its treatment - article our site.

According to statistics, every second woman of childbearingage at least once in their lives been diagnosed with "cervical erosion". According to the medical dictionary, the term refers to a defect of cervical mucosa. Here, it would seem so simple. But, unfortunately, only it seemed. This defect spoils sleep and nerves many women and requires immediate treatment. But first things first. 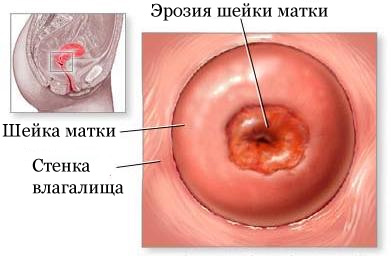 If you are diagnosed with congenital erosion (whichis quite rare), you are very lucky. In this case, the tender and vulnerable tissue of the vagina due to hormonal disorders (mostly teenagers) "settled" on the cervix. Such a situation runs itself after childbirth or other hormonal surge. But, despite this, it requires constant monitoring specialist.

There are true erosion (when the wound appears in the epithelium), which does not occur too often. Such a wound usually heals itself in a few weeks.

But the most common - is false orpseudo. It appears just as innate, but does not heal itself. Gentle vaginal tissue, which are not naturally endowed with protective functions, lends itself to the destructive influence of aggressive environment and various infections. To conclude it can be very pitiable. In this case, of course, need to be treated. 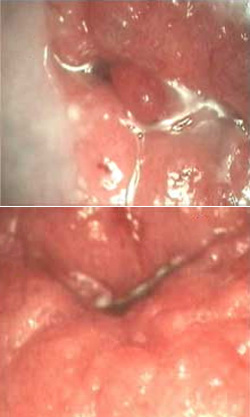 I was 19 years old when I first heard the word"erosion". And not just heard - I have put such diagnosis. I was shocked. Access to the Internet at the time I was not, and doctors are not particularly bother explaining. When I asked the doctor to tell us more about this diagnosis, I heard a phrase that I still remember: "It's okay, the usual ulcer on the cervix. Rooting is not, however, may develop into cancer. " A remarkable explanation, is not it? I could not understand the cause of this disease is with me, I've never hurt nothing. Just having studied medical encyclopedia, about the beginning of the idea of ​​what can trigger the appearance of erosion.

According to medical research, no one can say for sure what causes this defect of cervical tissue, but the list of its causes about that.

Firstly, the erosion can be triggeredhormonal disorders. It just occurs in girls between the ages of 13 years. Hormonal formation, age-related changes in the body can cause the appearance of erosion.

Therefore, dear mom, once in six months drivehis younger daughter for a visit to the gynecologist. After all, for nulliparous most importantly - constant monitoring of the disease course. And do not abuse an innocent child, because at this age the disease occurs even in virgins. Support daughter and explain in detail about her illness.

The second reason - early sexual activity. For immature cervical mucosa getting any infection, even the most it seemed to be harmless, and can be fatal in 99% of cases causes erosion. Sharpen infections especially against the background of reduced immunity, so have to fight with the whole chain of diseases.

The third reason - inflammatory processes of female genital sphere. That is why treatment is usually started c treatment of inflammation.

The fourth reason - mechanical damage. The most common are due to childbirth, abortion, or simply an injury during sex. Due to cracks or gaps appearing cervical tissue and erosion occurs. 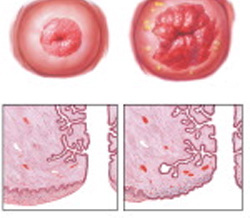 We are accustomed to the fact that the disease manifests itselfpain. In fact, the pain for many - the same push, after which we force ourselves to go to the doctor. Erosion is most often painless. It is difficult to diagnose the symptoms as they are accompanied by many more diseases. Erosion gynecologist diagnosed only at survey. But still, I want to transfer to our site readers symptoms of the disease. Hopefully, their appearance and speed alert the women's visit to the gynecologist.

Thus, any bloody issuesIn particular, appear after sexual intercourse- This is the first sign of erosion. Such isolation are also signs of pregnancy failure, or a precancerous condition of the genitals, so hurry to the doctor. Despite the fact that most women who are erosion, feel completely healthy, they still appear periodically pulling abdominal pain, pain during intercourse, abundant whitish discharge. The symptoms can be attributed to failure of the menstrual cycle.

I would like to once again emphasize the need for an early visit to the gynecologist in cases of any of the above symptoms. And fear not, all that is diagnosed in the early stages - is treated!

To treat or not to treat 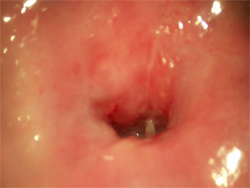 Once on the forum I read the message. In it she tells the story of a miracle, is not doing nothing, I got rid of erosion. According to her, after she was diagnosed, she decided not to treat the erosion and leave everything to chance. The next examination revealed erosion does not (I think it was just about the inherent erosion). And all visitors of the forum also unanimously decided to idle and wait for miracles.

Dear girls and women, erosion - not runny, and by itself does not pass! It is a proven fact many years of medical practice.

Moreover, improper treatment (includingself "as the girlfriend told"), or no treatment may eventually end in failure - erosion develop into a malignant tumor, or other equally unpleasant disease.

The only case in which after erosiondisappear without treatment - birth (again in the case of congenital erosion). After delivery, all the tissue of the uterus and cervix are updated. And even here, a 100% guarantee there is no cure. not recommended for the treatment of surgical methods for nulliparous women. For giving birth there are many surgical methods of treatment. Each of them has its pros and cons, so choose you and your doctor.

Before we prescribe treatment, the doctor should bereliably learn what he has to do. So you have to pass some tests. I was sent only to the biopsy, by the way, almost painless procedure. It is similar to an injection: exhale, second, and you're done! After the results of the treatment assigned. However, there may be additional tests: colposcopy (examination of erosion in magnification), smears on the composition of the flora, blood tests syphilisHIV. The list is necessary to define the doctor.

Before you treat erosion, it is necessary to eliminate the visiblecause, if any, based on the results of analyzes. For example, to heal the inflammation arising on a background of infections, sexually transmitted infections, and these infections directly themselves. And then the doctor will choose the best method for you to impact directly on the erosion.

Methods impact on erosion are the following:

1. Diathermocoagulation
The common people, burning the erosion of electric shock, resulting in a burnAnd after scar and cervix. Her kind - diatermokonizatsiya, in which the fabric is not only cauterized, but also completely removed from the erosion zone.

Back in the 18th century, physicians used to cauterizesomething like a soldering iron. Until modern times, little has changed. Diathermocoagulation - the most common method of treatment, in terms of what the device has to cauterize almost any antenatal clinic. Yes, and relatively inexpensive to carry out such a procedure. On this pros moxibustion electric shock end. obviously not a pleasant procedure. Though they say that the burning is not very painful, and rumors about the unbearable agony spread suspicious woman, do not believe. The process takes up to 20 minutes with each discharge current uterus greatly reduced. It reminds is the strongest labor pains, in the place of touch feels the heat. And the smell in the air, like the smell of burnt meat. After the procedure, about a month are very abundant transparent, and sometimes bleeding, often aching lower back, torturing weakness. Here's how it happens. But that's not all.

Erosion can not disappear the first time andYou need to repeat the procedure. In addition, the possible complications: problems with bearing children, infertility, worsening inflammation, bleeding, hematoma. I think very few people will want to experience the diathermocoagulation. Especially now by this method gradually withdraw, and occasionally abroad diatermokonizatsiyu use only for the treatment of cancer.

Use in nulliparous: forbidden.

* Prices may vary depending on the region and the medical facilities.

2. Cryotherapy
The essence of this method is that the area of ​​tissue,affected by erosion, it disintegrates under the influence of the flow of liquid nitrogen cryoprobe special. The site chosen is extremely accurate and healthy tissue is almost not damaged, scar the cervix is ​​not formed. The procedure lasts about 10 minutes. It is painless, just feel what's inside that something is happening, a little stomach pull. No odor. I did cryotherapy to the medical center, and I was even allowed to listen to music through headphones on the mobile, not to worry. Time has flown by. When allowed to stand, dizzy, the doctor said that nitrogen is so affected. However, two weeks after all were quite abundant watery discharge, but no weakness and back pain. This method is bloodless and very gentle. But it is not always applicable in cases of deep erosion. And in rare cases, you may need to re cryotherapy.

Use in nulliparous: perhaps. 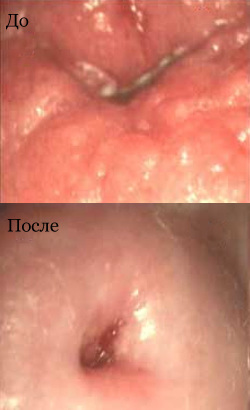 New modern method. He is regarded as effective and less dangerous. However, laser therapy can pass only a few modern hospitals as surgical laser - a rather expensive equipment. The essence of the procedure - the erosion of land lends itself to the impact parameter exposed by the laser beam, is fully controlled by the depth of destruction. Scarring does not remain, but some doctors believe this method is not suitable for use in nulliparous.

I know of several cases where using laser girl completely got rid of erosion. But, and I know a woman who has only decreased erosion.

So a 100% guarantee of cure no one gives. Try to choose an experienced physician and proven clinic.

Use in nulliparous: perhaps.

4. Radiowave surgery
The only non-invasive method. Exposure to radio wave occurs. It stimulates the internal energy of the cell, which in turn destroys the cell and vaporizes. quick and painless method. The scar does not arise, however, possible sukrovichnye selection.

Use in nulliparous: recommended.

5. Chemical coagulation
It applies only with minor amountserosion (less than 2-penny coin). In fact, this process of erosion special preparations (such as Solkovagina) that destroy the columnar epithelium. It takes a few (up to five) procedures. It does not guarantee complete healing.

Use in nulliparous: recommended.

I will not write on the pages of our site about the peopletreatments. Various sea buckthorn oils, lotions, and douching can not only improve the condition of the tissue, but also exacerbate erosion. And can do so that the erosion of the top drags on, but will continue to develop in depth. Therefore, do not experiment on yourself - not self-medicate!

All of these methods are done only cauterythe beginning of the menstrual cycle. Until complete healing of prohibited sexual activity, taking baths, general overheating. And if you do not want complications, it is necessary to strictly follow the doctor's recommendations.

I wish you health!