Home>Gynecology>Female condoms - what is it?

Female condoms - what is it?

Female condoms have a number of advantages tomale. They are controlled exclusively by women and can be used for a few hours before intercourse. They are more expensive than the male, but not so much that people could not buy them. 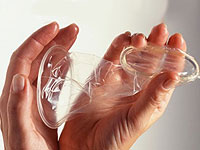 Female condoms have the form of transparentpouches of cylindrical shape of 15 cm in length, 8 cm in diameter. They consist of high-strength material which is designed for various age groups and the individual characteristics of each woman. These can be both condoms hypoallergenic polyurethane (material that does not chemically react with the body) and a flexible latex rings at the ends. They are gradually gaining popularity, and new products are increasingly appearing in stores. The US Department of Reproductive Health and Research is working with its partners in order to support the research, design, development, security, efficiency, quality control, procurement and promotion of the female condom.

Now in the market there are several new types of female condoms in different stages of development. Some have already gone on sale and are being implemented.

Operation of the female condom

Female condoms are establishedown woman or her partner. The condom is inserted into the vagina for some time before sexual intercourse or immediately before it. It is this kind of condoms provide protection against sexually transmitted diseases and unwanted pregnancies. In the inner part of the condom is a ring, which firmly adheres to a condom, covering the cervix. Second, a wide ring located on the outside and does not fall condom into the vagina. Thus condom ensures safety and convenience.

Reuse of the female condom

WHO recommends the use of each sexAct a new condom, be it male or female. A condom is required for each act of intercourse, when there is a risk of unintended pregnancy and / or sexually transmitted infections, including HIV.

Some women say they use the samethe female condom for multiple sex acts, saying such behavior is the high cost and limited availability of the product. This practice can result in both the women and their partners are not the happiest life events.