Home>Infectious diseases>Myths about sexually transmitted diseases. Do they correspond to reality?

Myths about sexually transmitted diseases. Do they correspond to reality?

Diseases that are in the Office of the goddess of love -Venus - already known in antiquity. Since then they have had time to acquire a variety of rumors, myths and legends. This topic is, unfortunately, does not cease to be relevant: nowadays the treatment of STDs is not particularly difficult, but the very level of the disease has increased several times in connection with the ubiquitous freedom of manners.

The first myth: if sexual intercourse with a partner of the sick took place only once, and you can not catch.

Yes, sometimes it happens. There are even cases when a few years of regular sexual relations are not infected spouses HIV carriers. But do not tempt fate: such cases are still not the rule, but the exception. But the treatment designated for the purpose of warning, it is reasonable to expose only one who committed adultery. If the adulterer addressed to the doctor shortly after a suspicious connection, the treatment will be assigned only to him, because the incubation period of STDs are usually large, and the other partner simply will not have time to catch. 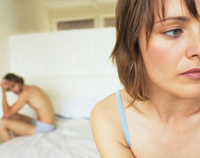 Myth Two: do not be afraid if the condom broke or it and do not - there are other methods of preventing infection.

Yes, there are such methods, but these drugs do not giveabsolute guarantee. Within a few months, it is necessary to monitor the state of health. And even better - right after "suspicious" of sexual intercourse to empty the bladder, wash the vulva with soap and seek medical advice immediately.

Yes, such cases are possible, but only in theif exercised unpardonable carelessness. Elementary compliance with the rules of personal hygiene will save you from trouble. Not someone else was finishing a cigarette, do not use other people's toothbrushes, lipstick, a towel, do not wear other people's things, including earrings.

Myth Four: State kozhvendispansera doctors immediately informed on the work that the person is sick with a venereal disease.

No. Now the practice of Soviet times in the past. On guard your secrets not only the Hippocratic oath, and the penal code.

Myth five: all diseases can be determined using a single assay.

Yes, this is a modern diagnostic method as PCC(Polymerase chain reaction), in fact, able to identify the causative agents of various diseases. However, one hundred percent accuracy, he nevertheless does not guarantee. So do not give up on the tests, which assigns you a doctor. Each of the studies (bacteriological, direct microscopic, serological, cultural) can give a more accurate and complete picture of the disease.

Myth Six: modern antibiotics will cure any infection for three days. It is enough to consult a medical reference.

This is a dangerous delusion. Universal medication does not exist. In each case, it will not only help a certain drug, but also a certain scheme of its application. And decide what to take and how to be able to just graduate.

Myth Seven: a small amount of alcohol while taking antibiotics will not hurt.

Hurt by the fact that this right is now yourbody treatment will be useless. Even a small dose of low-alcohol beverage in combination with an antibiotic has the same effect as the combination of acid and alkali: i.e. complete neutralization. And it is able to nullify all your efforts to get rid of the disease.

Of course, if you have taken a course of antibiotics in a hurry, no one can guarantee you the absence of relapses. Required also receive immunostimulatory drugs.