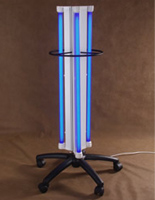 It has long been attributed to sunlightthe ability to prevent the spread of infections. In 1877, it was discovered that increasing the number of microorganisms is stopped by exposure to sunlight, and later found that this effect comes from the invisible part of the solar spectrum of radiation with a wavelength below 320 nm.

In the future, thanks to this discovery weredeveloped artificial sources of radiation that destroys bacteria, as well as methods of disinfection as air or solid surfaces of materials, without the use of chemical disinfectants and without high temperatures, and this is very important, since in many cases the use of last-mentioned disinfection procedures are either not effective or impossible.

For practical application range of ultraviolet (UV) rays are divided into three groups:

Radiation UV-A has an effect on a variety of photochemical processes, it is pigmented, but not the impact of erythematous, ie, does not cause redness of the skin.

UV-B radiation is used in therapeuticfor, as it is pigmented, erythematous (causing redness of the skin) effect in the human body, animals and birds of vitamin D, improves breathing, blood circulation, increases hemoglobin in the blood, strengthens the nervous system, increases the body's immunity.

Radiation UV-C has a high efficiency of destruction of microorganisms, ie, has a bactericidal action, causing redness of the skin and eye inflammation.

UV rays with a wavelength less than 200 nm canconvert air into ozone, which has a strong oxidizing effect, and a pungent smell. The concentration of 0.22 mg of ozone per cubic meter of air is the maximum permissible harmful to humans.

For the purpose of quartz air disinfectionaccording to the requirements of sanitary-epidemiological service regulations set rate - bactericidal efficiency. Bactericides efficient to (Jbk) - evaluation of the level of reduction of microbial contamination of the air environment as a result of exposure to UV rays, expressed as a percentage as a ratio of the number of dead microorganisms to their initial number before irradiation. For a variety of rooms with optional air disinfection requirements determine the necessary level of germicidal effectiveness

Kvartsevanie indoor produced bactericidal irradiators, which can be divided into several types:

Irradiators Ultraviolet germicidal(Quartz lamps) designed to inhibit the activity of microorganisms in the air and on the surfaces of medical and preventive treatment facilities, industrial, public and other institutions, are an effective means for the prevention and control of infectious agents.

Noteworthy combined Quartzlamps, since they allow direct irradiation of air and surfaces via the open lamp (required no people in the room) and dispersed using a closed (shielded) lamp (possibly used in the presence of people).

The principle of operation is based on any of the irradiatorapplication of UV-C range of UV radiation, which is emitted by germicidal lamp. Flavor irradiator necessary depending on the purity requirements for the room and its volume.

In connection with the inadmissibility of direct exposure to UV light in the eyes and skin of a person is necessary to observe the following arrangements for the illuminators.

The first thing to do is make sure there are no people, animals and plants in the room, which is necessary to make UV disinfection.

Further, depending on the room volume, the number of installed devices intended exposure time set the following parameters:

Before Kvartsevanie need to get out of the room,closing the door, turn feeds. During the irradiation session at the entrance to the room is illuminated display "DO NOT ENTER, ultraviolet irradiation GO!" Should be included (you must manually include or merge the electric circuit board and turn on the light irradiator). If a placard is not available, on the front door should be hung a plaque with a similar warning. At the end of the exposure and turn off the illuminator light panel.

Features kvartsevaniya premises in the presence of people

For the decontamination of air in the presence of peopleuses ultraviolet germicidal irradiators - recyclers who UV radiation sources are completely closed, and the air using fans pumped through tubes irradiated space. The principle of operation is similar to such irradiators above described devices for kvartsevaniya and performance depends not only on the power of the radiation sources, but also on the performance of the fan.