The basis of the method of rehabilitation

The rehabilitation system is based on multimodalapproach using diverse methods of influence on the patient. The main component of the method is the biomechanical correction of the spine and large joints, combined with a complex of therapeutic measures: reflexology, physiotherapy, massage system, rhythmic gymnastics, mechanotherapy and apitherapy.

When searching for new approaches to the rehabilitation of patientswith movement disorders and motor re-education, we have decided to apply to achieve a relatively new science - integrative anatomy and physiology. One of the directions of this science is the study of the functional relationship of muscles during movement. 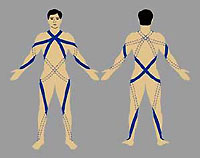 The studies showed that foroptimal performance of the motor functions of the muscles are functionally combined into groups - longitudinal muscle associations, muscle pairs (which are traditionally corrected during rehabilitation) and spiral muscle. Our attention is drawn muscle spirals, which are important for the formation of the motor functions, which involved not just one segment of the body, and needs coordinated action of the trunk and extremities.

Muscle spiral, passing from one side of the bodyand combining the other left and right body halves ensure: symmetry and normal body posture under gravity; cross-coordination of the upper and lower extremities belt during locomotion (walking, running, jumping). Muscle spiral support axial skeleton, dynamically fix the position of the head, keep the physiological curves of the spine are involved in the respiratory movements of the chest, as well as ensure the stability of body position and movement of the limbs. The formation of muscle spirals in humans occurs in parallel with the development of motor functions.

When pathological cerebral palsydevelopment of motor functions is accompanied by distorted the functioning of the existing muscle spirals and formation of pathological muscle chains. Therefore, one of the objectives of rehabilitation of patients with motor disorders is playing muscle spirals trunk and extremities, the normalization of the muscles and the formation of correct movement patterns.

The first device movements in patients correctionwith cerebral palsy has been modified costume "Penguin", created back in the 70's as a means of preventing the negative effects of weightlessness on the body of the astronaut. The jumpsuit was A built system of flexible rods, which create additional load on the muscles along the body axis and partially recreate the force of terrestrial gravity. At the beginning of the 90 years, this suit was modified and adapted for use in patients with cerebral palsy and has been called the suit "Adeli".

Work continued on its improvement, and in the late 90's was created by costume "Gravistat", which gave the opportunity to a wider impact on the patient's reflex apparatus.

Applying these ideas we have developed a holisticprogram of biodynamic movements correction, which is aimed at building a new motor skill. This is done by forming a proper operation of the muscle spirals torso and limbs of the patient, applying the principles of dynamic motion correction.

All classes of the program conducted with the use of a specially designed costume movements "Spiral" correction. 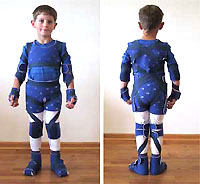 It is a system of flexible elasticrods, which spirally superimposed on the trunk and limbs and are attached to a special anchoring elements - vest, shorts, knee pads, elbow pads, Mitts and boots. The entire outer surface of the supporting elements is made from a special material suitable for attachment of elastic rods. The lack of hard parts in the support members greatly expands the range of possible physical therapy exercises.

Traction suit, due to its elastic propertiesprovide the necessary corrective efforts, and special Velcro surface linkage provides the ability to attach them to the support elements in any place and thus arbitrarily chosen point of application and direction of action of the force depending on the characteristics of movement disorders and the goal of treatment.

Corrective suit "Spiral" is used inconducting classes mobilizing gymnastics, mechanotherapy, when doing on the treadmill, gaming devices and rehabilitation during normal motor activity of the child. Systematic repetition of the correct movements promotes his memorization of the nervous system and, in the future, automatically use it.

The gradual formation of a new motorstereotype approximate physiological, it is achieved by increasing the multiplicity, diversity of movements and an appropriate choice of forces and vectors corrective efforts costume.

By stimulating compensatory possibilitiesthe child's body and brain plasticity activate this system creates in the body of the child a new functional state which opens the possibility for faster motor and mental development of the child.

Versatile therapeutic effect of this method, complementary and mutually reinforcing, are aimed at achieving the main goal of rehabilitation - to improve the quality of life of patients.

Designed biodynamic correction programmovement is an important component Kozijavkin techniques and is aimed at the formation of the correct movement patterns. All classes of the program conducted with the use of costume correction "Spiral" movements, which greatly expands the possibilities of the rehabilitation of patients with disorders of posture and movement.

Kozijavkin method was developed more than 15 yearsago, and since then more than 15 000 patients, including about 7 thousand patients from Germany, Austria, Switzerland, France and many other countries around the world underwent a rehabilitation course in this system. More than 40 families from the United States also repeatedly visited the Ukraine and successfully completed a course of intensive neurorehabilitation.

Back in 1993 the rehabilitation system wasofficially recognized and has received wide international prestige due to its effectiveness. In the encyclopedic edition of child orthopedics, edited by the German professor Nietarda in 1997 Kozijavkin procedure it was included in the four most effective conservative methods of rehabilitation of patients with cerebral palsy.