When there are no "name-calling" pheochromocytoma: She and "the great imitator", and "impressionistic tumor", and "Ten percent tumor." What is a pheochromocytoma? What is the mechanism of its development? It knows the author of this article.

Pheochromocytoma: historical milestones of knowledge of the disease 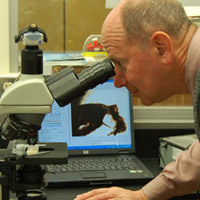 Pheochromocytoma figuratively called in medical circles and "the great imitator", and the "true pharmacological bomb" and "impressionistic tumor." What lies behind "pheochromocytoma" term?

Modern scientists do not know the real causeoccurrence of this tumor. They have only assumptions that this disease is genetic in nature. However, medicine has accumulated a lot of information about pheochromocytoma. Here are the major historical milestones of knowledge of this disease:


The prevalence of pheochromocytoma


Pheochromocytoma occurs in 1% of patients withconstantly elevated diastolic blood pressure, being one of the causes of hypertension. In a population of pheochromocytoma are relatively rare, with a frequency of greater than 1:. 200 thousand a year, and the incidence is less than 1 person in 2 million people.

The swelling may occur in persons of any age,but most frequently it is observed between 20 and 40 years. The prevalence of pheochromocytomas among adult men and women is the same, but in children is more common in boys - 60%. Multiple tumors often found in children than in adults (respectively 35 and 8% of cases).

Currently not seem possibletalk about the absolute lifetime diagnosis of chromaffin adrenal tumors. Often remains undiagnosed pheochromocytoma, in such cases, the high risk of serious cardiovascular events, or death. American researchers claim that, despite the perfection of methods of diagnosis, approximately 1/3 of the patients with the diagnosis of pheochromocytoma is not possible to establish in life.


The mechanism of development of pheochromocytoma

Concordance between the size of the tumor, the levelcatecholamines in blood and the clinical picture does not exist. Small tumors can produce and release into the blood large amounts of catecholamines, while large tumors metabolize catecholamines in its own tissue and produce only a small part of them.

Another figurative name pheochromocytoma -"Ten percent tumor" - due to the fact that 10% of cases it is malignant, at 10% - localized is the adrenal 10% - found bilateral involvement, 10% - combined with a hereditary disease and a 10% - found in children .


In the absence of severe hypertensive complicationscrises (coronary heart disease and heart failure, cerebrovascular accident, retinal detachment), according to the advanced cases of the disease, disabled patients after surgical treatment is completely preserved.