Plaque in children occurs due to a lack of solid food, and poor oral hygiene. Which way to rid of this trouble, and how much it costs to remove tartar? 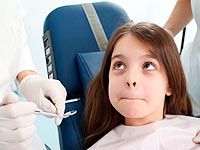 Unfortunately, children are not immune to the occurrence of dental problems. Is there any particular scaling in children? What is the cost to remove tartar child?

Why is formed tartar in a child

Causes of tartar are the same in both children and adults. The reason for it - the lack of oral hygiene.

Plaque in small and big kids - notvery rare. Not every mother remembers that the baby teeth should be cleaned with a moment that was cut first. Of course, at first, especially babies, toothpaste is not required. Suffice soft silicone soft brush to remove plaque before it turns into tartar. In children who are just starting solid foods, plaque produced little, and remove it is not difficult.

Children receiving food from the adult table,have the basic skills of care of itself - a special category. A common problem - they strongly resist brushing. Exactly how to persuade the child to agree to dental care - the subject of another article. But understand, from what it was formed tartar in a child, it is necessary, because the stone in primary teeth can be formed with the same probability, that at the root.

Preschoolers - another group at riskearning tartar. The greatest danger for them is sweet, is not only children that they love, but usually also produced in large numbers from all the "well-wishers". Carbohydrates - the perfect food for the bacteria that are happy to nest in the inaccessible areas of the oral cavity with the help of saliva perfectly glued with mineral deposits and dead skin cells. Thus it is formed first soft plaque and then calculus. Speaking of doshkolyatah, it is useful to once again ask the question clearly: "From what appears tartar?" And answer it clearly: "From the sweet."

Children older than 10 years who have changed teeth may haveanother non-obvious cause of tartar. Smoking! Unfortunately, not all parents are aware of teen smoking dangerous amusements of their children. However, the dentist does not hold: for a special dark color plaque he always understand that a child smokes.

What is the cost to remove the child tartar 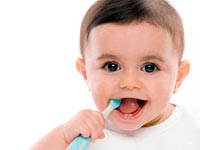 Children do not like to brush their teeth - it is an axiom. But the foundation of the emergence of dental problems not only in the non-observance of Hygiene of the mouth. One of the reasons for the emergence of ubiquitous stone on baby teeth - the lack of solid food in children's diet. It happens that the child initially did not like anything to chew: and he rubbed apple with carrot, crushed nuts, crackers and drying slurried. A child who does not like a tough food, often formed tartar, which in any case will have to be removed. By the way ... the lack of hard food triggers and speech therapy problems.

Price is to remove plaque,It varies depending on the procedure. Ultrasound removal costs from 500 to 1500 rubles, depending on the number of damaged teeth. The laser will be more expensive: up to 3000. However, dental clinics often go to meet patients and offer no comprehensive price for the removal of stones in general, and consider each tooth individually. If the child has not neglected the situation in the mouth, the removal of "pozubno" can be very budget. 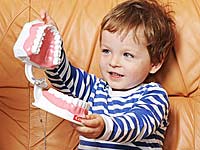 Many parents in the care of children tryoffer them all only natural. Some sincerely believe that the removal of tartar folk remedies - the best that can be offered gentle creatures. In fact this is not true. Folk remedies will not help matters. No lemon juice, hydrogen peroxide or no black radish will not remove tartar in children. Solve the problem will only dentist.

No special procedures other thanAdults, by ultrasonic or laser cleaning does not. Modern professional teeth cleaning is painless and does not even require anesthesia. If you do not have time to do much harm to the child attempts to remove tartar folk remedy like soda or acetic acid, in a dental clinic to cope with problems quickly and efficiently. And at the same time to tell your child about colors befitting health of teeth and gums, and warn about the consequences of excessive eating sweets and bad habits like smoking.

And no matter how much it costs to remove the tartar: child health is most important. A stone removal may experience better than other ways to teach the crumbs to take care of teeth.