In this article, we want to pay attentionparents on issues such as eye injury. Children frolic and negligence often leads to eye injury. What to do when the child trauma of an eye, how to give first aid? 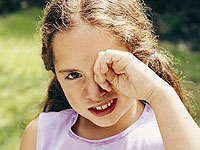 The child - a being unpredictable. A moment ago, he quietly played in the sandbox, and now puffing climbing a high hill. Just hugging boy in the neighborhood, and a moment later broke out brawl. A consequence of the high activity in children often bruises and contusions. The fact that such a downed knees and elbows all parents know, they know how to treat the wound and put a bandage for bleeding, but less aware appear in this issue, as the eye injury. Children frolic and carelessness often cause eye injuries and know what to do in such a situation - the duty of the parents.


Bruising as a trauma in a child's eyes

The mechanism of producing such an injury as a contusion clearto each. In the case of the eye is often a punch, ball, crash or fall on the protruding objects. Options injury eyes of a lot of children - the result of one. It appears a sharp pain, and pain in the eyes, swollen eyelids, eye gap narrows, there is a fear of excessive tearing and light. Soon, the skin around the eyes becomes purplish-blue color, the people a picture called "black eye", and scientifically - hematoma.

Intensity of eye trauma symptoms depends on thewhat they were damaged tissue. The doctor can ascertain corneal contusion, concussion eye vessels, lens or retina. The more deeply impressed by the eye tissue, the more dangerous the consequences, with a strong eye injury is not to be trifled with, it can lead to blindness and loss of the organ of vision.

According to statistics, the eye injuryis listed among the main causes of the decrease in visual acuity and monocular blindness, that is a total loss of vision in one eye. Regardless of what it looks like an injured eye, the child should be examined by an ophthalmologist. Sometimes external signs do not indicate the degree of damage to body tissues.

The consequences of the injury can not be felt for sometime if the injury is, of course, was not accompanied by a penetrating injury and rupture of the eyeball. Usually, long-term "results" of the children's antics are becoming noticeable, when the child begins to lose vision, and the reason - bleeding in the eyes.

If left unchecked eye injury, and time does not take measures to prevent the formation of scar tissue, the retina begins to peel off, it threatens the complete loss of vision.


The first steps in trauma in a child's eyes

with the eye injury to a child first aid must be provided immediately. While maintaining the integrity of the eyeball action shall be as follows.

The next item in the list of first aid measures in case of an eye injury should be the delivery of the victim to the trauma or the ophthalmology department of the hospital.