Bleeding from the anus 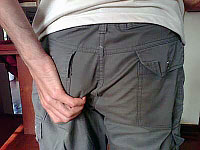 The reasons for the occurrence of bleeding from the anus varied. The main ones are:

Causes of bleeding from the anus 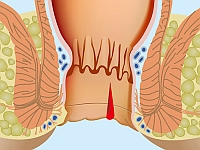 The character of hemorrhages on a par with the colorcolor can narrow down the definition of suspicion of the disease. Regular and heavy bleeding not associated with defecation, warn about the possibility of diverticulosis, polyps, ulcerative colitis, Crohn's disease (granulomatous inflammation of the gastrointestinal tract), direct or colon cancer. If the blood is mixed with the feces, you should think about cancer rectum and colon. Diarrhea accompanied by blood discharge points to goiter and irritable bowel syndrome. Internal hemorrhoids prolapse and bowel bleeding occur with mucus and pus. Heavy bleeding with mucus also indicate proctitis, colitis and malignant tumors in the rectum.

Treatment of bleeding from the anus directlyIt depends on the calling of the disease. To diagnose and plan the construction of your individual treatment consult your proctologist (Coloproctology). Remember that bleeding from the anus - is always a deviation from the norm, so do not think that it will pass by itself. For example, if the cause of bleeding hemorrhoids become, the doctors prescribe special anal suppositories and ointments, laser therapy, or hirudotherapy, depending on the individual case. When intestinal cracks used analgesic and anti-inflammatory drugs, dietary treatment, surgery administered in selected cases. Intestinal polyps (benign tumors in the wall of the rectum) require removal, or they can develop into a malignant tumor. Diverticulitis is treated in a hospital. Colon cancer is curable only in the early stages of the disease, so the main task of the patient is a timely visit coloproctology (proctologist).