Bronchiectasis often beginslittle by little, gradually and does not attract much attention. Meanwhile, it can cause serious complications. To avoid them, it is important to see a doctor in time. Description of signs of disease can be found in the article. 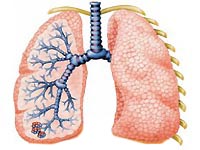 Bronchiectasis is called cylindrical orsaccular bronchiectasis with the loss of their drainage function. Bronchiectasis can be congenital or acquired. Congenital bronchiectasis rare. As a rule, they are caused by defects of the bronchi. Acquired bronchiectasis in children develop in the first 3 years of life often against a background of pneumonia complicating measles, whooping cough and others.

bronchiectasis development is promoted by the following factors:

For the characteristic of bronchiectasisDuring the long-term with periodic exacerbations. Patients may be concerned about for many years only to cough with gradually increasing amounts of sputum. At the same time periods of relative prosperity followed by periods of exacerbations, during which the body temperature rises, a significant amount of mucus is released (from 50 to 200-500 ml and more). Sputum purulent or muco-purulent, while standing in a vessel is divided pas three layers (lower - pus, medium - clear liquid, upper - mucus). Often seen in the sputum streaked with blood. In severe cases, pulmonary hemorrhage occur.

During exacerbation of common symptoms arechest pain, shortness of breath. The classic symptom of bronchiectasis - fingers in the form of drum sticks and nails in the form of time windows. Often these changes are accompanied by bursting pain in the hands and feet.


Stages of development of bronchiectasis

Manifestations of bronchiectasis depend on the stage of its development. There are three stages of the disease:

It is important not to bring the disease to its advanced stages and in time to see a doctor.