About the diagnosis of lung abscess. As recognized by the "photo" disease? How to distinguish it from other lung diseases? How to treat a lung abscess and whether the operation is necessary? About everything in the article. 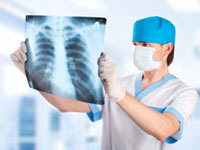 Lung abscess - a disease in whichlack of timely treatment literacy inevitably leads to complications and death of the patient. Diagnosing it is usually not difficult, however, to distinguish normal from tubercular abscess cavity or decaying tumor very difficult.

The basis of diagnostic search in abscesslight - the picture of the disease, supported by X-ray diffraction data. Lung abscess on "photos" made in the stage of abscess - a rounded intense shade. I must say that the right lung abscess is more common and it is because the right bronchus is shorter and wider than the left, which means that the aspiration mechanism of infection is often triggered. 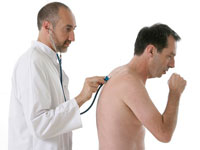 In the second stage of the disease whenthe patient begins to stand and purulent sputum abscess is opened, lung abscess in the "photo" already looks different. This rounded shadow with a cavity inside which the horizontal level of liquid visible. Interestingly, when changing the position of the patient, the level of "Incised" sputum in lung abscess, also changes its direction. That is why for the diagnosis of lung abscess radiograph made in two projections: in the position of the patient lying on his side and standing. More accurate data on the size, location, nature of the ulcer, the presence of pulmonary sequestration provides a computed tomography.

The pace of recovery of the patient is directly dependent onhow well sputum departs in abscess, so the X-rays - is not only a diagnostic tool, but also a way to monitor the effectiveness of treatment. The rise of the liquid level in the cavity of the abscess shows poor outflow of pus, and is the reason for the intensification of therapy.

Abscess and other lung diseases

Abscess of the left or of the right lung to be distinguished from other diseases associated with a similar radiological symptoms. 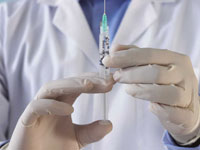 Treatment of lung abscess is held in thoracic surgical department. The primary goal of therapy is to provide effective drainage of purulent cavities.

Surgical treatment of lung abscess is used in the absence of effect of conservative measures.