Home>pulmonology>Pain in the chest in the middle

Pain in the chest in the middle

What does the feeling of pain in the chest. The most common diseases are manifested by this symptom.

The most obvious symptom of a variety of diseases - it's a pain. That it is a warning signal of trouble, it is because people stop her to ignore the rest of the symptoms, and run to the doctor. Pain in the chest in the middle cause diseases of the digestive, cardiovascular, thoracic trauma.

Chest pain: the pathology of the digestive system

Of all the organs of the digestive system in the chest is only esophagus. His illness and sometimes provoke pain in the chest.

Chemical burns to the esophagus if swallowedvarious corrosive liquids cause the most severe pain. Most often, this pathology occurs in young people in a suicide attempt. In addition to pain, marked vomiting, belching, excessive salivation, fear and arousal of the patient. After a few hours there are signs of intoxication: fever, shortness of breath, heartbeat, drop in blood pressure, shock.

The second very unpleasant pathology -reflux esophagitis. Summoned it is insufficiently tight closure esophageal sphincter - the muscle located between the esophagus and the stomach. This occurs periodically throw gastric contents into the esophagus. Acid contained in it attacks the mucous membranes, causing erosion and even ulcers. Pain while burning, occurs when the body is tilted forward, the supine position, smoking or alcohol use.

Hiatal also accompaniedpain in the lower chest. It results from stretching of the diaphragm fiber bodies that protrude into the chest cavity through a defect. The pain is usually burning or dull, localized in the chest and in the pit of the stomach, in hypochondria. It often pays to heart, left shoulder or arm. Increases with physical exertion, the body tilted forward, in the supine position, ie at a time when there are conditions for the casting of gastric contents in the opposite direction, that is, into the esophagus.

The most common cause of pain in the chestcell is coronary heart disease. There is this pathology is due to narrowing of the lumen of the coronary arteries affected by atherosclerosis. Reduced blood flow to these vascular supply leads to a reduction of the heart muscle that is responsible for that the intensity of pain. The pain of angina pectoris (a form of ischemic heart disease) - pressing, compression, localized behind the breastbone. Typical irradiation direction - to the left arm, shoulder, arm, neck and interscapular region. The pain is usually caused by physical or emotional stress. An important point in the diagnosis of angina is the disappearance of her after the cessation of exercise or taking nitroglycerin.

If the chest pain does not disappear after 20even minutes after taking nitroglycerin, a person suspected acute myocardial infarction. This life-threatening condition characterized by a fairly high mortality rate and is a cause for emergency medical care. When a heart attack the pain is very strong, giving the left arm, shoulder, neck and shoulder. The patient appears the fear of imminent death, weakness, blood pressure may drop down to the development of shock. 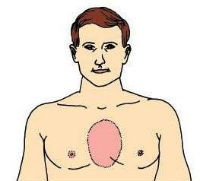 Even more deadly pathology manifestedchest pain, - pulmonary embolism. It develops most often in people suffering from various diseases of leg veins, atrial fibrillation, diabetes. The pain in this disease are very similar to stenokardicheskie, but does not irradiate and amplified at the time of inhalation. Analgesics cropped attack is not fully, nitroglycerin has a very weak effect. Along with pain there choking, blue skin, loss of consciousness. Even with timely medical care provided mortality from pulmonary embolism than 10%, indicating a high risk of the disease.

Finally, dissecting aortic aneurysm as wellcharacterized by severe pain. The chest is the initial part of the great vessels. When an atherosclerotic lesion in the aortic wall defect occurs between its inner and middle sheath. Return blood penetrates, further increasing the area of ​​damage. It was at this point and there is a huge pain intensity, reflex increase in blood pressure and restlessness. Symptoms of a heart attack is very similar, and this often causes diagnostic errors. The delay in accurate diagnosis leads to the inevitable finale - the aorta rupture and death. According to statistics from the first two days of the disease are fatal for almost half of the patients.