What is chronic lung abscess

Acute Lung abscess - limited cavityformed as a result of purulent fusion of the lung tissue. Pathogen - various microorganisms (usually Staphylococcus aureus). Characteristically reduction of general and local immune function due to entering the lungs and bronchial foreign bodies, mucus, vomit - in alcoholic intoxication, after a convulsive seizure or unconscious. Contribute to chronic diseases and infections (diabetes, blood diseases), violation of the drainage function of bronchi, long-term use of glucocorticoids, cytotoxic drugs and immunosuppressants.

Chronic lung abscess - a long-termsuppurative the current process, which is the outcome of an acute abscess. If lung abscess is not completed within 2 months, it becomes chronic.

Transition Causes of acute to chronic abscess may be divided into two groups:

Conditional features of the pathological process:

Caused by errors in the treatment of the patient:

Against the background of the common symptoms of acute and chronicabscesses, such as tachycardia, asymmetrical breathing movements of the chest, loosening respiratory noise, mixed wet rales, breath amforicheskogo with good drainage of the abscess cavity, three-layer sputum: yellow mucus, watery layer, and pus (at the bottom). 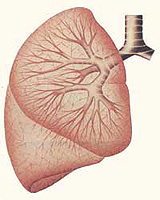 Illness flows in cycles, with periodicacute exacerbations of fever, an increase in the amount of a typical three-layer sputum. The duration of the stages depends on how the functions are preserved draining bronchus and oporozhnyaemosti abscess cavity.

There are two basic types of course of chronic abscesses.

The first type. The acute stage is completed clinicalpatient recovery or significant improvement. The patient was discharged from hospital with a normal body temperature. After discharge, the condition remains satisfactory, and the patient often starts to work. However, after a certain 'period again increased body temperature, cough increases. After 7-12 days there is an abscess drained, the body temperature drops. Subsequently exacerbation become longer and more frequent. Developing phenomenon of purulent bronchitis, growing intoxication and associated degenerative changes in the organs.

The second type. The acute period without pronounced remission enterschronic stage. The disease occurs with hectic fever. Patients secrete a large number of purulent sputum, dividing when standing on three layers. Rapidly evolving and growing severe intoxication, leading to exhaustion and a general degeneration of parenchymal organs. Often this type of disease occurs when multiple lung abscesses. Patients distinctive look: they are pale, sallow skin color, mucous membranes cyanotic, there is puffiness of the face, swelling appear on the feet and lower back related to protein starvation and impaired renal function. Rapidly growing pulmonary heart disease from which patients die.

In chronic abscess may develop the same complications that are inherent in the acute period of the disease.