Rheumatism is a chronic,undulating current inflammatory disease that affects the connective tissue, especially the cardiovascular system of the body. To a lesser extent affected are the joints, muscles, nervous system and other organs.

Rheumatic fever - a disease of childhood. more
of all new cases of 6-12-year-olds are very rare cases in
During the first 3 years of life. Rheumatism adults is 75-80%
a disease that began in childhood.

It is believed that rheumatism caused by a microbe species
streptococcus. Repeated streptococcal pharyngitis, tonsillitis, and
chronic infection (inflammation of the tonsils, nasal paranasal
sinuses, teeth untreated) allergenic body, in connection with which any
acute illness can cause typical of rheumatism
inflammation. Therefore, rheumatism is also called
infectious and allergic disease. 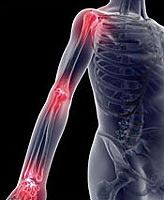 Rheumatism usually starts after 1-2 weeks after undergoing
tonsillitis, scarlet fever, acute respiratory infections, or other diseases. The child becomes
sluggish, he disappears appetite, fatigue appear on the complaints and
headache. The temperature rises to 38-39 °, the child strongly sweats.
There are complaints of pain in the joints and in the heart, sometimes on pain
in the stomach and heart. Classic rheumatism manifests itself in
inflammation of the heart and joints. In the joints, pain, they swell,
the skin over the affected joints are warmer than in other areas. Usually
It affects large joints: knee, ankle, elbow, metacarpal.
As a rule, affects symmetrical joints. Pain different volatile
character in one joint inflammation disappeared in another -
suddenly appear. After the start of treatment in inflammation
the joints is eliminated within a few days, in rare cases, it
saved up to 2 weeks.

In some cases, rheumatic fever, children can bring a
volatile minor complaints of pain in the joints, while
inflammatory phenomena do not occur.

Rheumatism in children can begin and proceed without any
inflammation of the joints, thus affecting primarily the heart. Outstanding
Russian pediatrician W. Kissel figuratively, that "rheumatism licks
joints and bites the heart. "

Another sign of rheumatic fever in children is defeated
central nervous system, which is expressed in the "dance of the holy
Witt ", or chorea. Chorea usually develops slowly. Child
It becomes easily excitable, capricious, uncontrollable, touchy, because
every little thing comes into conflict, crying. Periods of depression
quickly replaced by elevated mood. Movements become clumsy
and uncertain. On the face there faces, limbs, and sometimes all
body undergo spontaneous and uncoordinated twitching.
It develops muscle weakness. Deteriorating handwriting, difficulties arise in
meal time (the child can carry food by mouth, drop the fork and spoons
m. p.), speech becomes slurred. There may be disorders
equilibrium.

After the disappearance of the clinical symptoms of a child for another
a long time continued to be emotionally unstable.
Reduces efficiency. Any mental strain can
again cause exacerbation of the disease.

As noted above, different wave-like rheumatism
over. Acute attacks of the disease (active phase) are replaced by gaps,
when the active manifestations of rheumatic fever are absent (inactive phase).
The active periods may be repeated. The inactive phase usually lasts
several months to several years. When unfavorable course
rheumatism active periods follow one another, as a result,
child develop severe heart disease in the form of damages
heart valves (heart disease). In some cases, rheumatism
limited to one or two attacks, leaving behind
significant cardiac lesions.

Repeated attacks of rheumatic fever tend to occur during the first three years
transferred after the first attack. Therefore it is very important in this period,
strictly observe the prescribed doctor mode.

Rheumatism Treatment long. As from the
the sick child, and parents it requires perseverance and
sequence. In this regard, the active phase of rheumatism better
treated in a hospital setting, and then continue the treatment at home. AT
Depending on the process activity and providing home opportunities
care, inpatient treatment takes an average of 6-8, and sometimes 10 weeks.

After returning from the hospital, the child should be on gentle
mode. His release from school for another 1-2 months. AT
home day regimen must include daily rest (at least 2 hours)
walking outdoors and a long night's sleep. Food should
be rich in protein and vitamins, contain fewer carbohydrates. AT
the diet must be present fresh vegetables and fruits.

Medicines that child will take home, usually writes
the doctor who treated him in the hospital. After 2 weeks after leaving the hospital
you must take the child to the children's clinic at the reception to
cardiorheumatology, and in the absence of a specialist - to the district
doctor. The doctor will give further guidance on the treatment. Child,
suffering from rheumatism should be under constant dispensary
supervision of a physician for an additional 5 years. After the acute rheumatic fever
Child examined 1-2 times a month, in the future, depending on the
the nature of the disease, - once a quarter or every six months. 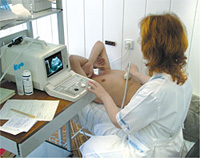 Start going to the school the child is not earlier than after 3-4
months after the start of an acute attack of rheumatism. In many respects, this period
It depends on the volume of the heart lesions and disease progression. Permission to
attendance gives the doctor cardiorheumatologist. The doctor also frees
the child from physical education for a period of not less than 2-3 years. Children,
suffering from rheumatism, school generally exempt from any
exercise, including the cleaning of classrooms and so on. d.
If necessary, the child is given one day off per week.
It is desirable in the first year after the disease refuse to participate
Child in various circles and amateur.

Suffering from rheumatism child can not at par with their classmates
participate in academic and extracurricular activities, he gets tired quickly. Besides
it usually turns out that the child after a long illness
It lags far behind their classmates. All this, of course,
negative impact on the psyche of the child, and may make it
inferiority complex. And it may happen that a child at all
lost interest in studies. And the way to school can bore
child. In connection with all this baby who has had rheumatic fever,
it is desirable to direct the study in special sanatorium for 1-2 years
school. Despite the fact that in normal operating school
Secondary school curriculum, it has a number of training
benefits: lessons duration is at 45 and 40 minutes,
There are two big changes during the sessions; children for long periods are at
outdoors, including the breaks. As a result, children are not so
tired by the end of training. The school works hard daily routine,
provided regular meals, daily rest, all the children involved
exercise in a special program in accordance with the need to
receive treatment (mud therapy, physical therapy, medication and
r. h.).

If your child is not in a sanatorium school, and at home,
be sure to follow all instructions cardiorheumatology. it
It is absolutely necessary in order to prevent new attacks of rheumatic fever.

Usually within the first 2-3 years after the rheumatic fever baby
to prevent streptococcal infection prescribe injections
long-acting penicillin preparations (bitsillin), which
make 1 every three weeks. In milder cases, treatments
bitsillinom carried out for 6 weeks in the spring and autumn because it
while the risk of ill rheumatism biggest. As well as receiving all
medication use bitsillina may cause allergic reactions.
Make sure the child does not complain if after the injection of feeling unwell,
It does not increase if he had a fever, if a skin rash appears. at
occurrence of these phenomena is required to report them to your doctor.

Moderate physical exercise are beneficial to
cardiovascular system. But as the child released 0m lessons
physical education in school, you have to drive it to the office of medical
Physical training clinic.

Important is the treatment of chronic infection foci, which
not only contribute to the emergence of the first attack of rheumatism, but also
exacerbations of the disease. Therefore, 1 - 2 times a year to drive a child
dentist and doctor of the ear, nose and throat. Dangerous in relation to acute
rheumatic process and past illnesses. About all
an illness immediately inform the doctor-cardiorheumatology,
that examines the child against rheumatism and optionally
prescribe additional treatment.

After an acute attack of rheumatic fever in a child can not be vaccinated for 3-4 years. Exemption from immunization gives the attending physician.

From the recreational activities we should mention the summer sanatorium
pioneer camps. A year after an acute attack of children suffering
rheumatism, can be sent to the sanatorium treatment at the All-Union
Resorts (Yevpatoriya, Kislovodsk, and others.). In addressing these problems, you also
cardiorheumatologist help. Remember that each new attack of rheumatism
increasingly affects the heart and therefore can cause
child's disability. Therefore, strictly follow the instructions
physician, carefully follow the daily routine and diet
child, provide him regular exposure to fresh air and
regularly happens to him on the control of the cardiorheumatology.