The modern world dictates its own terms: we have everything and everywhere in time, be mobile and hardy.


On the move - life itself. But, unfortunately, often have problems that hinder move actively and therefore, reduce the quality of life. One of the most common, unpleasant and intractable of them - are diseases of the musculoskeletal system.

They are familiar with literally everyone: it osteochondrosis its manifestations in the form of pain in the neck, back, lower back (sciatica); and problems with joints - arthritis and osteoarthritis (degenerative changes in cartilage, pain and limited mobility); and strains and sprains, injuries, including sports. And to be a sport, toned, slim - it is right and beautiful. But often sport and fitness lead to injury, adverse effects of which are felt many years later.

According to official statistics, Russia is now about20 mln. People suffer from diseases of the joints and spine. These diseases are a strong lead as the cause of the loss or reduction of ability to work, significantly ahead of other diseases. In addition, the victims are increasingly becoming not only the elderly, but young and active people. Their occurrence guilty and genetic predisposition and overweight (the scourge of our age), and the effects of trauma, and poor nutrition, and uneven load on the spine, and even a poor environment. And when "lumbago" loin or "Buy» neck - what kind of activities are we talking about?

Is there an alternative to steroids and NSAIDs?

Pain - the first signal that makes usconsult your doctor or pharmacist. If surgery is not required, the doctor prescribes a nonsteroidal anti-inflammatory drugs (NSAIDs) and / or hormonal drugs. Unfortunately, they have a fairly severe side effects. And so severe that often this type of treatment should be discontinued. Many patients are contraindicated altogether.

Doctors are looking for a middle ground: They offer a patient simultaneously with the received "inside" drug treatment safer analogues - ointments, creams, gels. But the effectiveness of these forms is not as high, and use them uncomfortable: it is necessary to apply several times a day, they stain the clothes and so on..

More progressive medicine for painjoints, neck, lower back constantly looking for not only patients. Doctors have become increasingly explore and implement new methods of treatment, looking at the culture and traditions of the East. From ancient times to the present day in China, Japan, Korea, widely used medical bandages, compresses, plasters. At the junction of Eastern wisdom, the thousand-year experience of Chinese medicine with advanced modern technology and there was quite a bold and interesting idea: to create therapeutic drugs in the form of patches.

The combination of Eastern medicine and modern technology

Now in Russia there was an innovative therapeutic anti-inflammatory analgesic patch "NANOPLAST forte." 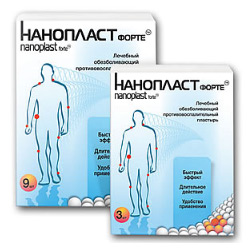 According to the rules of evidence-based medicine patchHe has undergone clinical studies in which its efficacy and safety have been confirmed. The prefix "nano" in the title is not accidental: in the creation of plaster was used modern, ultra-small technologies enabling deeper and longer exert a therapeutic effect on the cellular level. Gentle heat in conjunction with the magnetic field helps to improve local blood - and lymph circulation, reduction of congestion, inflammation and pain. "NANOPLAST Fort" can be used not only short, but long courses, both as monotherapy and as part of complex treatment of diseases of the joints, spine, muscles and ligaments - it is compatible with the drugs except for simultaneous use of other external funds for some and the same areas of the skin. It is used also in conjunction with physical therapy, physical therapy and massage. Of the significant advantages - plaster leaves no residue on skin and clothes, is quite simple and easy to use, does not change the habitual way of life, does not restrict movement. "NANOPLAST fort" sold in pharmacies in small and large sizes, depending on the application. Naturally, before use should consult with a specialist.

Of course, doctors believe, "NANOPLAST forte" is notsolve the global problem of diseases of the musculoskeletal system. But it is essential to improve the quality of life of people suffering from these ailments, he is capable.

Before use, read the instructions.