Home>Rheumatology>Hormones and physiotherapy in the treatment of ankylosing spondylitis

Hormones and physiotherapy in the treatment of ankylosing spondylitis

It is still the best way to treat the diseaseSpondylitis does not exist, doctors can only slow down the progress of the disease, with some methods are still being questioned. Read more about the individual methods of treatment of ankylosing spondylitis read the article.


At this point the drug allowingcompletely cure ankylosing spondylitis, does not exist. Doctors are trying to combine different means, but as long as they allow you to keep only the development of the disease. So arguments about the feasibility of various methods of treatment then conducted. 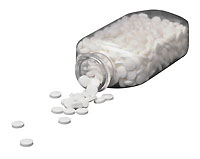 Corticosteroid hormones are producedadrenal human organism as a response to any inflammatory process. Long enough, in 1949, scientists found a way to artificially synthesize these hormones in high doses administered to a patient to relieve inflammation. Widespread found such therapy for the treatment of patients with ankylosing spondylitis. However, soon it proved that corticosteroids, removing the inflammation in the joints, have a number of adverse effects on the organism. Like any hormonal artificially derived corticosteroid hormones cause addiction, physical and mental. With regular use of corticosteroids, the human body stops producing the hormone itself, adrenal atrophy. Excess weight, the appearance of hair on the face, stomach ulcer - this is not all negative effects of long-term use of corticosteroids. It is very dangerous for patients with Ankylosing spondylitis is osteoporosis caused by taking corticosteroids. The increased fragility of bones leading to fractures and forced immobility due to plaster can be for patients with ankylosing spondylitis fatal.

However, despite the risks of treatmentcorticosteroid hormones can provide significant therapeutic effect and improve the patient's condition. Therefore, in each case, the question of justification of the use of corticosteroids should be addressed individually. It is necessary to warn in time, or at least to minimize the harmful effects of the drugs. Thus, preparations in the form of tablets, for example, prednisolone, taken in the same time, enveloping abundant squeezed stomach fluids - jelly or yogurt to reduce adverse effects on the stomach. If the hormones are administered by injection, the patient should focus on the prevention of osteoporosis, ie a little more time to devote to physical therapy. While driving in the bone comes more calcium strengthens them.

If the inflammation is concentrated in any onejoint, often used local infusion preparations containing corticosteroids. These injections are usually disposable, they bring a temporary but substantial relief. In addition, single administration of the preparation does not cause side effects. 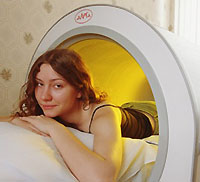 Physical therapy for patients with proceduresAnkylosing spondylitis is usually used in conjunction with drug therapy during the spa treatment and to prolong the periods of remission. The most common are physiotherapy magnetic therapy, thermotherapy and cryotherapy. Doctors disagree about the effectiveness of each of these funds, as, indeed, and the patients themselves.

Least of all complaints is magnetic. Treatment of the magnetic field is almost always brings sick Ankylosing spondylitis at least short-term relief. Due to the fact that many patients it is difficult to go to the clinic for treatments, they are often purchased devices for magnetic therapy at home.

Heat treatment is also easy to carry out at homeconditions, however, experience shows that in some cases heaters or paraffin application to the painful joints can cause even more inflammation. The positive effect gives the room but a hot bath can enhance the swelling of the joints.

Most controversy revolves around cryotherapy,ie cold treatment. Most likely, this is due to a sharp deterioration in the general condition of the patient, which is almost always celebrated after the session of cryotherapy. Many doctors warn patients immediately after the first session can become inflamed all the joints. But this does not mean that cryotherapy brings only harm. A number of patients after a week of receiving a significant improvement occurred procedures.

Massage and chiropractic therapy is also used toTreatment of ankylosing spondylitis, when the disease is in remission. Almost all doctors are inclined to believe that massage should not be intense, it can only provoke an inflammatory process. This view argues folk medicine. There are cases when the condition of patients with Ankylosing spondylitis is significantly improved after a hard massage courses conducted by traditional healers, are not recognized by official medicine.

From the above it follows that on anyPhysiotherapeutic methods of treatment of ankylosing spondylitis is no single opinion, and the patient has when choosing to rely on their own intuition and reactions of own organism.