Home>Rheumatology>Rehabilitation after injuries and operations. The development of the joints. contractures Treatment

Rehabilitation after injuries and operations. The development of the joints. contractures Treatment

Do not be put off "for later" treatment of painful joints, because it can only increase the pain. 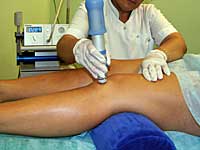 In modern traumatology introduced neweffective methods for rapid repositioning, improved methods of fixation. However, during rehabilitation in the treatment of joints is time-consuming.

After operations on the locomotor system,such as fixation of bone fracture, joint replacement of large joints in osteoarthritis, arthroscopy is damaged intraarticular structures, or simply after removing the plaster develops joint stiffness (contractures), muscle weakness and impaired coordination of movements in the injured limb. Also due to trauma, surgery and prolonged immobilization of the affected part of the body decreases the speed of blood circulation and lymph flow, which is manifested in the form of edema and thromboembolic complications.

You can often find contracture in neurology,more specifically for diseases of the nervous system:. for example, in acute ischemic stroke (stroke and traumatic brain injury), etc .. In these diseases often manifest spastic contracture. Spasmodic contracture is caused by increased muscle tone, usually flexors (most frequent). These contractures occur in the paralyzed limbs, so they move the patient can not practically. Due to the finding of limb flexion there is an infringement of blood circulation and metabolism. In general, functional and morphological features such contractions are similar to immobilization.

According to the control of the expert commission (KEK)reasons for the reduction or loss of ability to work in 26% of cases is not the morphological and functional changes that developed as a result of injury. This may be due to the shortcomings of the organization and methods of treatment of patients with injuries ODE: untimely, late-onset, irregular conduct, low intensity rehabilitation or insufficient use of all the means of rehabilitation. Sometimes its role is underestimated in the postoperative period, which reduces the effectiveness of surgical intervention, and sometimes makes it unreasonable.

Treatment of contractures in the Comprehensive Clinic

Treatment of contractures - an important stage in the struggle with the disease. Individual methods of rehabilitation used by our experts, and a comprehensive approach gives a positive effect.

There is no need to postpone it "for later"! Unfortunately, pathological changes in the joints do not go away, and the only progress and develop into a more serious illness.

Speed ​​up the process of recovery from injury,operations on joints, extremities fractures will effectively correct rehabilitation process. The complex clinical work individually to develop a joint with the patient without the use of simulators.

The introduction of their own development gives excellent results, which are generally observed after the 8th-10th sessions.