Patchy hair loss. What to do

Krugovidnoe, nesting hair loss. It is manifested by a sudden loss of hair, which is localized in certain areas of the scalp, face or body. 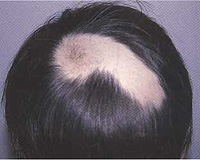 It characterized by the appearance on the scalphead rounded shape bald spots prone to peripheral growth and mergers until the complete loss of all hair. Among the many factors causing the disease are isolated congenital predisposition, various diseases and stress emotsionnalnye. Hair with alopecia areata as if the life of their own, leaving the head and back as they please. Restores the hair is usually thin and non-pigmented, and only then they get a normal color and texture.

Alopecia areata may be suspected if:

The first signs of the disease manifest themselves inmostly aged 15-25 years of age or children. In 10-25% of cases the disease has a family background. The most interesting thing is that people do not feel anything. Foci alopecia gradually increased, sometimes even merge with one another. Hair in these areas are thin, twisted, sometimes reminiscent of a question mark. Such hair effortlessly pulled out by the root. The skin surface in areas where hair fell markedly paler than the one where the hair remained.

It is now believed that there are a numbergenes which, if any, make a person more susceptible to alopecia areata. The trigger, apparently, are the external factors, but the degree of damage, and the character of the resistance to treatment is determined by the presence and interaction of several genes.

The trigger signal for the development of alopecia areata are:

Unfortunately, universal tools and methodsalopecia areata treatment exists. Hair resilience even after many years of illness. In some cases, hair is restored only at a constant treatment. Sometimes it is possible very rapid hair restoration.

Some methods of treating alopecia areata in which hair restoration possible:

In this disease, all methods which providetemporary hair restoration are essential. Since neither cause loss or causes of spontaneous hair restoration with alopecia areata has not been fully clarified, any factors, including psychogenic must be taken into account. Unexpectedly, they can lead to improved condition and even cure. Hair transplantation with alopecia areata usually only worsens the situation and does not help (unlike androgenic alopecia) as alopecia areata may be linked with the general state of the immune and nervous system and psyche.

In the treatment of patchy baldness spendmicroscopic examination of hair of the patient and, depending on its structure, necessary medications prescribed. With the help of special devices studied condition of your hair follicles and scalp.

In alopecia areata, hair may recover, even after several years of the disease. However, incurable cases still are.

In this issue, the greatest impact on the condition of the hair and scalp have: