Even the strongest and most determined womanaccustomed to defeating any life difficulties on their own, they can unsettle health problems. We are talking about the human papillomavirus (HPV) - an infection that has become very common in recent years. Fortunately, science does not stand still, and effective HPV clearance schemes have now been developed.

Even the strongest and most determined womanaccustomed to defeating any life difficulties on their own, they can unsettle health problems. Especially if these problems concern the intimate sphere, cause cosmetic damage and can lead to fatal consequences. We are talking about the human papillomavirus (HPV) - an infection that has become very common in recent years.


According to various sources, HPV in the world infects 70-90% of people of reproductive age.

Fortunately, HPV infection does not always lead to the development of the disease.

There are over 100 types of different viruses, and only some of them are not harmful to health. Some types of HPV cause formation of warts on the skin. Warts - benign, and apart from a cosmetic defect, do not bring other inconveniences.

Human papillomaviruses affecting the organs of the genitourinary system cause us great trouble. Under the influence of the virus on the skin and mucous membrane of urinary organs there are genital warts - Education soft flesh color on the stem that growing, are similar in shape to the "cauliflower" or "cock's comb".

Anogenital warts rarely ozlokachestvlyayutsya, but cause significant discomfort, easily damaged, bleeding and promote the accession of a bacterial infection.

Cancer of the cervix and HPV: is there a connection?

Cervical cancer in 93% of cases develops as a result of HPV infection with a high oncogenic risk. The most dangerous of them: types 16, 18, 45 and 56.

A tiny virus particles consisting of only 8-10 proteins, penetrating into the cervical mucus cells, triggers specific processes leading to the development of dysplasia - precancerous condition. Transition dysplasia cancer occurs under the effect of female sex hormones, namely, - one of the chemical conversion estrogen products.

That is why, HPV infection leads to the development of malignant tumors predominantly in womenAnd often occurs in men asymptomatic, sometimes manifesting itself warts or genital warts.

According to WHO, every day about 1,300 women inthe world is getting cervical cancer caused by HPV. Increasingly, young girls of 15-20 years old become victims of this dangerous disease. More than 240,000 women die from cervical cancer each year.

To prevent the development of cervical cancer, timely treatment of HPV is necessary. All women infected with HPV need to visit a gynecologist once every six months and undergo an analysis for oncocytology.

What is the prevention of HPV?

For the prevention of HPV should avoid unprotected sex. The condom greatly reduces the chance of infection, but does not provide 100% security. Viral particles can not only be placed on the skin of the genital organs, but also in the crotch, therefore possible infection even in the presence of a condom through microdamages on the skin.

In case of unprotected intercourse you need to apply as early as possible to a medical facility for emergency prevention with special antiseptics and medicines.

remember, that the only reliable way to protect yourself from HPV is fidelity in a couple throughout their lives.

Is there a cure HPV?

It is proved that a healthy and strong immune system in some cases is able to independently cope with HPV. People younger than 30 years old the spontaneous cure of the virus often occurs within 2 years from the moment of infection.

The situation is different in people with weakened immunity. In them, the virus can take root in the body for a long time, becoming invulnerable to the immune system and traditional treatment. Bad prognostic sign is considered to preserve the virus in the body for more than 2 years. In this case we speak of chronic carriers of HPV.

For many years it was believed that a fully curedHPV is not possible at this stage. All the doctors' efforts were directed to slow down the process and get rid of the clinical manifestations of infection. However, the carrier of the virus persisted, forcing people to live for many years in the "waiting" relapse.

Fortunately, science does not stand still, and effective HPV clearance schemes have now been developed

New in the treatment of HPV 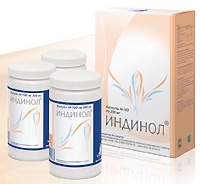 As a result of five years of research, the Research Institute of Molecular Medicine MMA named after THEM. Sechenov domestic scientists created the drug Indinol®, which has antitumor activity. The main active ingredient Indinol - indole-3-carbinol, - isolated from plants of the family Cruciferae.

Manufacturers claimed that the drug has a dual effect on HPV:

In practice it turned out that in conjunction withimmunomodulators Indinol® actually leads to effective removal of HPV - infected cells from the body. Indinol® especially effective in the early stages of HPV infection in people at high risk of chronic process.