The operation involves removing plaque in the openfrom the carotid artery. Anesthesia - Local anesthesia with intravenous light sleeping pills. This type of anesthesia allows you to monitor the state of the brain during carotid clamping. If necessary, use a special temporary shunt, so that during the operation of the brain blood circulation is not compromised. In complex cases, a general anesthetic and monitoring of brain state is carried out on the basis of cerebral oximetry (measurement of oxygen levels in the brain of blood) 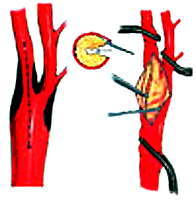 Held incision the full length of the modified artery. The special tool is held detachment of plaque and remove it.

The surgical site is well washed to remove fine particles of an atherosclerotic plaque.

The inner shell is fixed by separate joints if necessary.

Then a hole is sutured carotid artery using a special patch to prevent its subsequent re-narrowing.

If located in atheromathe beginning of the internal carotid artery, then applies its removal by the "eversion", so-called eversion endarterectomy. The internal carotid artery is cut, peeled plaque, the artery is inverted as a stocking to remove plaque. Then the artery is sewn to the old place. This procedure is much faster and easier to "classical", but only if achievable short - 2.5 cm atherosclerotic plaque.

Currently, the operation to secure the carotid arteries, are short. The risk of complications is less than 3%. Hospitalization in most cases necessary for 3-4 days.

An alternative to the classic operation recentlyIt has become the X-ray endovascular balloon dilatation and stenting of carotid arteries, but this intervention is indicated only in certain clinical situations ... 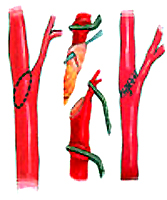 Also open surgery, forrestoring patency of the carotid arteries in their narrowing by atherosclerotic plaques are promising endovascular interventions. These operations are conducted through a puncture in an artery in the thigh. For the affected artery is fed a special probe with the balloon inflating lumen which stretch the narrowed artery. In order not to block the artery again, in its lumen establish a special net in the form of a tube (stent), which performs the function of a carcass. Stenting is not only less invasive; It is performed under local anesthesia and therefore minimizes the duration of the patient's hospital stay. The danger of these earlier techniques was that when the probe carrying plaque could crumble and it slices through the blood could get into the brain, causing a stroke. However, in recent years, improved technology of endovascular interventions on the carotid artery significantly reduces the risk of stroke during this manipulation.

To capture plaque pieces usedspecial filters trap. Currently, only slightly higher than in the leading clinics of the world the risk of stroke during stenting than with open carotid endarterectomy.

Also open surgery, forrestoring patency of the carotid arteries in their narrowing by atherosclerotic plaques are promising endovascular vmeshatelstva.V Currently, endovascular interventions on the carotid arteries performed in elderly patients with comorbidities that increase the risk of open surgery. However, the accumulation of clinical material and the development of new technologies to protect the brain, in the near future, these interventions will be able to replace the open vascular surgery.