Cryptorchidism - a fairly common anomaly in the development of children, in which the testicles are not descended into the scrotum.

Immediately after the birth of cryptorchidism occurs in 10% of boys, to
the first year, 70% of them spontaneously omission of eggs in
scrotum. 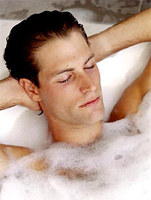 At the heart of cryptorchidism
is a sexual dysfunction of the system as a whole, expressed in primary
defeat of testicular function and latent failure
hypothalamic-pituitary system. The delay may be due to testicular
his way of lowering the physiological (in the retroperitoneal space -
abdominal cryptorchidism or in the inguinal canal - inguinal cryptorchidism) or outside
this path (ectopic testis). If ectopic testis is located under the skin
crotch, abdomen or thigh, and others.

When false cryptorchidism no permanent fixation
testes in the scrotum. In the absence of one or both testicles notes
tightened scrotum, missing testicle fails, as a rule,
palpated through the abdominal wall, bring down in the course of the inguinal canal or
into the scrotum. Sometimes eggs can not be determined.

Perhaps a combination of cryptorchidism with inguinal hernia.

Definitely causes cryptorchidism not defined. there are several
the causes of this condition. Cryptorchidism father or brother increases the risk
occurrence of disease, indicating that the genetic fate
mechanism. Another important cause of undescended testicle - a hormonal
an imbalance in the body of the mother and fetus third trimester of pregnancy.

Among the factors increasing the risk of cryptorchidism stand out:

Diagnosis and treatment of cryptorchidism

A fundamental point in the diagnosis of cryptorchidism is inspection
Urologist (children's urologist), a pediatrician. In order to distinguish
cryptorchidism congenital absence of the testis can be carried out
magnetic resonance imaging or computed tomography of abdominal
cavity and pelvic organs. If the egg is not defined in the inguinal
the channel can be performed laparoscopy - inspection of the abdominal viscera
cavity via endovideosurgical technology (introduced through
a small hole).

Treatment of cryptorchidism can be therapeutic (hormonal) or surgically.

Given the possible complications from ignoring undescended
testicle. It is necessary to carry out a weighted treatment revealed cryptorchidism
the age of 6 months. You must still determine whether the change early
treatment to improve the situation with frequent formation
malignant degeneration and decreased fertility,
caused by cryptorchidism.