Vampires - it is fashionable. About them write books and make films. In them, the vampires look beautiful and mysterious. Hardly anyone knows that the legends they are the real foundation - porphyria disease. Let's see what the "real" vampires.

Vampirism - modern subculture unitingyoung people who consider themselves vampires. Basically, the interest is limited to the study of the vampire theme in the art of imitation and appearance of your favorite characters, young people are unlikely to think about the history of the origin of vampires images.

The movement of "vampirism" was born in 1970thanks to admirers of Anne Rice, author of the famous novel "Interview with the Vampire." However, the vampire theme has its roots in the distant past, and is reflected in the folklore of many peoples.

The image of a vampire in art took shape over the years, butmost vividly reflected in the published in 1897 Gothic novel by Irish writer Bram Stoker's "Dracula", the following works owe their existence to the immortal creation.

What are the signs of literary vampirism? 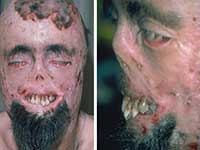 Most often, vampires are portrayed as intelligent, elegant, mysterious and sexy lady, leading a secluded life.

The blood they need in order to keep your metabolism and not die. According to the legends:

Vampirism as a disease porphyria 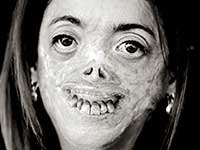 Not possessing expertise in the field of medicine, drawinginspiration from the Irish myths about vampires, in the traditions of the peoples of Transylvania, the historical account of the life of Vlad Tepes, the inverse image of Dracula, Stoker, without knowing it, described the suffering of seriously ill human porphyria.

Porphyria, or - the purple disease, a group of diseases associated with metabolic disorders of porphyrin, bright red pigment. At the heart disease are disorders of heme synthesis -porphyrin compounds with iron, the basis of human red blood cells. Failure in the system of education of heme leads to anemia, accumulation in the body of the intermediate metabolic products that have toxic effects on organs and systems that cause the typical symptoms of "vampire" of the disease.

The causes of porphyria are at the genetic level, inherited disease. The probability of gene transfer rather porphyriahigh, ill parents "gives" child the defective gene in 50% of cases, regardless of sex, but only 20% of the clinical picture unfolds. For his demonstration necessary action provoking factors: Certain medications, infections, hormonal changes, certain foods and alcohol - not for nothing mythical vampire aspect of human feasts.

The symptoms of porphyria

The cases of vampirism as a disease more common among men and appear in the spring and summer months. A typical feature is porphyria urine red-brownThat due to the presence of unoxidized porfirinogena, which is converted into the light magenta porphyrin.

Acute porphyria manifested by severe pain in the abdomen, lower back, inextremities, tachycardia, increased blood pressure, vomiting, muscle weakness, agitation, hallucinations, delusions, epileptiform seizures and other symptoms developing as a result of acute poisoning of the body, the resulting product of porphyrin metabolism and diffuse lesions of the peripheral and central nervous system.

Porphyria is a very typical symptoms.

One can imagine the reaction of people in the Middlecentury, when they were faced with a patient with porphyria. This spectacle has left a trace in the memory imprinted in the legends, mythical overgrown details.

Porphyria severe disease is treated primarilyinfusion of heme. Additionally appointed symptomatic agents, plasmapheresis, blood is needed for the patient to cope with intoxication, and to just live.