Like any acute circulatory failure, and later, and
breathing is a condition accompanied by manifestations
central nervous system - the original feeling of fear,
anxiety, even excited, and then dizziness, progressive
oppression of consciousness up to coma.

Depending on the intensity factor and allergic effects
features of the body's reaction - anaphylactic shock can develop
in the time interval from a few minutes (10-15 min) to several
hours.

First Aid (doctor) should necessarily cause immediate
at any initial acute manifestations of allergic reaction has
growing character. Or even at the minimum of allergic (above
described) forms, but accompanied by increased heart rate, decreased
(Even moderate - 10-20 mm Hg..) Of blood pressure, the appearance of
shortness of breath, bronchospasm, edema
mucous hypopharynx (cough, dysphonia - hoarseness, feeling
suffocation). In general, the rule is that any patient with acute allergic
the reaction should be examined by a doctor immediately. But, when a
features described above in addition to a severe allergic reaction,
the ambulance dispatcher must be additionally and specially notified to make a decision on emergency medical care
specialized team ambulance. 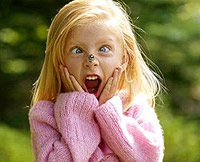 Remember that anaphylactic reaction is easier to prevent than to treat. In no event should not wait for a comprehensive picture of anaphylactic shock to
call the ambulance. This is due to its life-threatening nature of the flow. Anaphylactic shock - requires immediate
hospitalization in connection with the necessity of providing them with competent medical care in the intensive care unit.

Given the timing of the development of the state of anaphylactic shock
emergency care may be necessary in these patients at the stage
the arrival of "first" and during transport
patients
that requires a suitably qualified team of staff
ambulance (the ability to carry out resuscitation and
intense therapeutic interventions) and equipment of ambulance
aid equipment (heart monitor with pulse oximeter, respiratory
machine, set for intubation and tracheo (conic) tomy), oxygen
medicines and solutions.

conducted
events (anti-inflammatory,
decongestants, respiratory therapy)
You should not delay or prevent the transportation of the patient in
hospital. Except for short periods of episodes required for
resuscitation (chest compressions and intubation), if
they can not, for any reason, be performed during the movement.
This is due to the fact that all these measures do not guarantee a quick
cupping manifestations of anaphylactic shock, and do not replace those
the possibility of skilled care, which are available in
hospital.

Prior to the arrival of "first" brigade, if possible, should:

It should be remembered,
that information of value to the emergency doctor,
you can imagine the patient, his relatives or close people,
and those who were close to the patient during development
anaphylactic shock, is: