Home>Psychiatry>What is an anxiety disorder

What is an anxiety disorder

Alarm - this is extremely
unpleasant feeling. Sometimes a person begins to experience unexplained
panic. This may be the presence of a person on
unknown reason causing you anxiety. It can thrill
felt by you at some point. Sometimes a person is feeling
panic anxiety, although the events that triggered this alert,
long gone.

This incessant feeling
tension, anxiety, fear. If a man is experiencing
exaggerated or unfounded fears, it can be called mental
disorder.

What can be attributed to anxiety disorders:

The most common form of anxiety disorders - phobias.
Of course, everyone is afraid of something. But until then, until his
fear does not hinder normal life, this is not a phobia.
Phobia begins when a person starts to behave with caution on
soy fears. He does something only if it does not threaten the essence
or phenomenon, which he fears. The most common such
fears as acrophobia (fear of heights), claustrophobia (fear of closed
spaces), agoraphobia (fear of being out of his house).

Anorexia. This fear
acquire excess weight. Most often, this disorder occurs in
Women, especially young girls. They adhere so strictly
diet, that sometimes it becomes incompatible with life. Diagnosis
Anorexia is placed when a person loses more than 15% of its
initial weight.

Bulimia.
Man overeat, trying to drown out the alarm. Then he receives
Are laxative causes vomiting. The most common bulimia
Women from 17 to 22 years. 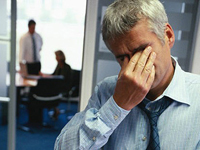 Obsessions - a kind of obsessive-compulsive disorder. These include obsessions, memories. Obsessions often cause compulsions - compulsions. Compulsions may take the form of
isolated compulsive actions - such as namarschivanie forehead,
licking lips. Sometimes they are a bit of a complicated ritual
or ceremony, when a person feels obliged to produce a series of
any actions or movements.

Posttraumatic stress disorder is diagnosed when a person has in the past, there is a serious shock or trauma.
Man is constantly going through again and again to injure his event.
The symptoms of PTSD are the dreams of the event, anxiety,
guilt, difficulty concentrating, excessive
suspicion and violent reaction to situations reminiscent of the trauma.
It is characteristic of the survivors of natural disasters, terrorist
Acts undergoing military action, prisoner torture and abuse.

For example, in the US, according to statistics,
about 12 million women have suffered post-traumatic stress disorder, the cause of which was
physical or sexual violence.

Of course, all of these cases require
expert intervention. Self-medication is inappropriate and dangerous. but
doctors still remind about some methods of maintaining mental
health that people can help themselves and reinforce their
the behavior of the treatment carried out by specialists.

Such recommendations include,
for example, the work of passion or hobby, caring about
others, focus on the positive aspects of their lives,
planning your future, the ability to look at the situation with humor.

It should be remembered that no
tablets and doctor's prescription will not do the most important thing: change its
internal microclimate.