Hydrocele, if surgery is needed

Sometimes a hydrocele (hydrocele) runs itself. And if not? On the operations practiced by modern medicine with hydrocele, you will learn from this article.


When surgery is needed

For small amounts, if not dropsyhard, not painful and does not cause severe cosmetic defect, the child up to one year, you can watch it, because during this time a message from the abdominal cavity may stop by itself. In the absence of any positive changes can only be treated surgically.

The indications for early surgicalinterventions are communicating hydrocephalus with significant changes in its size, single or bilateral hydrocele. Reported dropsy is dangerous in terms of developing a hernia and should be quickly eliminated to prevent infringement of the intestine. Reactive edema resolves spontaneously and does not require special treatment. It is necessary to treat a root cause of it.

Currently, there are fewsurgical treatments for dropsy of testicular membranes - Winckelmann, Bergman, Lord and puncture method. The essence of all surgical treatment methods is reduced to the elimination of hydrocele. However, each method has its indications and contraindications, advantages and disadvantages.

What is the operation Winckelmann


The operation in children is performed under general anesthesia, at theadults - under local anesthesia. In the front area of ​​the scrotum, swelling over, conducted skin incision length of 4 - 5 cm and then all the shells to the tunica vaginalis. The egg in the vaginal membrane is displayed in the wound. Further held puncture the tunica vaginalis syringe and pumped liquid. Further, this shell also dissected. After that examined egg and its appendage. Then, the plastic shells of eggs for Winckelmann. It lies in the fact that the shell are turned as if "inside out" and stapled.

Thus fluid produced epitheliumtunica vaginalis testis is absorbed surrounding tissues. When communicating hydrocele also sutured clearance processus vaginalis. Next, the skin is sutured nodal catgut sutures. The wound left a small rubber drain. This is milking preventing accumulation in the blood and scrotum hematoma formation. Immediately after surgery the wound superimposed bubble ice for two hours. The stitches dissolve on their own within 10 days. After surgery, Winckelmann, as with varicoceles, superimposed on the scrotum jockstrap - suspensory bandage. 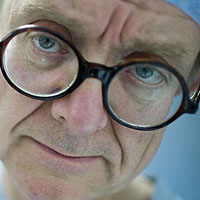 This operation is carried out at a hydrocele large thickening membranes.

Technique is similar to the above-described first. On the front surface of the swelling of the scrotal incision length 5 -. 6 cm shell egg layers are cut. Further, with the tunica vaginalis testis is displayed in the wound. As the liquid is pumped via a syringe. Then dissected tunica vaginalis testis and it is excised around the testicle. On the remains of the tunica vaginalis imposed catgut sutures. Then the egg sinks back into the scrotum. Catgut sutures are sutured skin. The wound left a small rubber drain. Immediately after surgery the wound superimposed bubble ice for two hours. The stitches dissolve on their own within 10 days. On the scrotum superimposed jockstrap.

During these operations for the traditionalhydrocele to expose dropsical sac or cyst operate, as a rule, an extended section of the scrotum, the release dropsical bag from the surrounding tissue and complete removal of eggs in the wound. As a result, the shell of the scrotum injured, ruptured blood vessels, which are reduced, making it difficult to stop bleeding and leads to the formation of hematomas.

What is the Lord's operation


Lord surgery technique involves the dissectiondropsical bag and shirring around the tunica vaginalis testis, which is not exempt from the surrounding tissue and the wound sprained. Due to this, it is minimized adjacent tissue trauma and vascular supply.

What is the treatment for hydrocele puncture


Puncture method is one of the easiest andis that carried out hydrocele puncture needle and the pumped liquid. Unfortunately, the results of this treatment are short and always develop recurrent hydrocele.