In this article, pediatric urologist gives answers to the most frequently asked questions about hydrocele (hydrocele) in children.

- What is the difference hydrocele, hydrocele and hydrocele?

- These are different names for the disease. Hydrocele, or hydrocele or hydrocele is a fluid accumulation in the shells of eggs, which leads to an increase in the scrotum, and sometimes swelling in the groin area. Isolation occurs hydrocele when fluid surrounds the egg and can not flow into other cavities and informing I hydrocele, wherein hydropic fluid can flow into the abdominal cavity and back through a special duct - vaginal process peritoneum. Hydrocele is often combined with an inguinal hernia.

- What is the difference hydrocele (hydrocele) newborns?

- Neonates and infantshydrocele in most cases isolated from the abdominal cavity and passes on its own within 6-12 months (80% of cases). Hydrocele newborns and infants is associated with birth trauma, hormonal status and features state of the lymphatic drainage of the scrotum.

Isolated hydrocele testes in the first year childrenLife is more often bilateral. Often there is an increase of dropsy, and it becomes hard. In a tense edema usually held puncture (inserting a needle) to remove fluid from the testicular membranes. Operations are performed rarely.

To treat or not to treat

- Why should be treated dropsy?

- Eggs are extremely sensitive to changesnormal temperature and can only operate in a narrow temperature range. Increasing the testicle temperature even by a few tenths of a degree penalized the development and testicular function. Edema is an additional shell around the egg, which prevents heat loss and leads to testicular overheating. As a result of impaired spermatogenesis and testicular hormonal function, which is the cause of infertility.

- How is communicating hydrocele?

- During fetal development, the testicles descend intoscrotum through the inguinal canal. Together with him in the scrotum drops outgrowth of the peritoneum forming the inner shell eggs. This - the so-called processus vaginalis of the peritoneum.

Normally, the time of birth or within the firstmonths of life, the upper part of the process of the peritoneum, passing through the inguinal canal grows and turns into a thin cord, and the message shell eggs from the abdominal cavity disappears. Thus, neither peritoneal fluid, abdominal organs or may not penetrate into the cavity, where the egg. The lower part of the processus vaginalis of the peritoneum forms a slit-like cavity around the testicle, which is that in dropsy serves as a receptacle for the dropsical fluid.

The main cause of communicatinghydrocele - cleft processus vaginalis of the peritoneum. Then liquid can flow from the abdominal cavity in the shell egg and accumulate there. 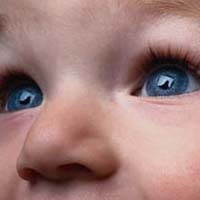 - Is it possible to spontaneous cure communicating hydrocele?

Failure to follow these recommendations leads to underdevelopment of the testicle and lower chances of having children.

- How long can observe and not treat hydrocele?

- Hydrocele in children 1 year of ageIt requires observation of children's urologist, andrologist. In the case of fluid accumulation and the appearance of stress in the egg shells are held puncture with removal of dropsical fluid. Sometimes it takes repeated puncture. Reported edema usually observed up to 1.5-2 years.

- When the operation is performed at a hydrocele?

- Which option is the best anesthesia to the child?

- The best option of anesthesia during surgeryabout hydrocele in childhood modern anesthesia combined with local anesthesia of long-acting drugs and the mask anesthesia.

- What operations are conducted at the hydrocele in children?

- Type of surgery depends on the patient's age andfeatures dropsy. When communicating hydrocele usually used Ross technique - the selection of the elements of the spermatic cord from a small incision in the groin area, excision and ligation of the peritoneal process at the internal inguinal ring, as well as the formation of a "window" in the egg shells. Delicate operation that requires good technique - neat and careful dissection with preservation of anatomical structures of the spermatic cord - the vas deferens and testicular vessels and inguinal nerve.

Sometimes used laparoscopic surgerywith hydrocele, but trauma, the risk of recurrence and complications when used above and anesthesia duration longer, so they are not widely spread.

In isolated cases of dropsy used operations on eggs shells, such as transactions and Bergman Winckelmann performed from the incision in the scrotum.

- How is a child after surgery?

- After surgery, the child is in the hospital fromseveral hours up to 7 days (depending on the clinic). in dropsy operations are generally well tolerated by children and does not significantly interfere with their movements. However, at sharp movements or constipation due to an increase in intra-abdominal pressure or direct actions, the formation of hematoma in the scrotum and groin. Therefore, children should limit activity to postoperative wound healing and diet.

Within 2 weeks after surgery do not wearunderwear pinching the scrotum to avoid testicular pushing up to the inguinal canal, because of possible testicular fixation on the scrotum. Children of school age are exempt from physical education for 1 month.

- What complications occur after surgery for hydrocele?

- The overall risk of complications is from 2 to 8%. A particularly high percentage of recurrences seen with untimely execution of operations.

Relapses dropsy occur with a frequency of 0.5until 6% . In adolescence, the recurrence of hydrocephalus observed more frequently. The risk of infertility after such operations may be due to surgical trauma of the vas deferens and averages about 2-5%.

One complication is the high fixation egg when the egg in the process of operation is pulled up to the inguinal canal and subsequently fixed there scar seam.

Testicular atrophy is rare and is associated with impaired blood flow in the testicle which occurs when peritoneal mobilization process of the elements of the spermatic cord.

Sometimes postoperative scarmarked unpleasant or painful sensations - hypersensitivity related to the infringement in the rumen or damage to the nerve endings. These effects usually disappear within 6-12 months after surgery.

- How can we prevent the development of postoperative complications?

- To prevent the development of complications allow a high level of technology operations and timely determination of indications for surgical treatment.

Subject to the timing of surgical treatment and technically flawless execution of operations forecast in the health and ability to have children in the vast majority of favorable observations.