In Ukraine, the mortality from myocardial infarction is one of the highest in Europe. In our hearts a lot of enemies, it needs to be protected, and timely care of it will help to avoid trouble.

Cardiovascular disease is the lead amongcauses of mortality in the world. Most people die from strokes, in second place in the ranking of the sad heart attacks. Heart attack - an acute disease of the heart caused by insufficient blood supply to a certain area of ​​the myocardium. Often it provokes atherosclerotic plaque in the vessel of the heart, which gradually increases and narrows the lumen.
If, for whatever reasons, the plaque beginsto burst, to the place of her break rush platelets. Besides the fact that they are mechanically sealed lumen (so-called form interwalled thrombus), platelets also secrete active agents that promote the narrowing of the coronary vessel. As a result, certain areas of myocardial blood does not flow, and therefore oxygen. This so-called PIS. If you remove the plaque on time, it will not develop a heart attack. However, if measures are not taken, the site, which does not enter the blood begins to wither away. This is itself a heart attack. Under its influence on the site necrosis formed scar - part of the myocardium is out of work.

Development of a heart attack can be prevented, ifPeople just asked for medical help and diagnosis is defined in the first 12 hours. This is the maximum time, but it is best to stop the progression of the disease in the first six. There are special drugs that are administered intravenously, and the resulting blood clot resolves. Due to their impact or a heart attack does not develop (ie, renewed circulation of the affected artery) or reduced lesion area - smaller scar, the more favorable forecasts. 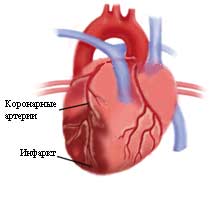 Furthermore, use of the affected stentingvessel - the technique expensive, but effective. After femoral artery, "includes" in the coronary and mechanically disrupt the clot, putting in place a special mesh narrowed, which pulls the walls of the affected vessel. This person suffers a heart attack is much easier, and projections, again, are much more optimistic.

On the necrosis of heart muscle cells organismpain signals. In most cases, the pain of a heart attack is very characteristic: the chest, compressing, can be given in the left arm or shoulder. But it happens in a different way: for example, the lower jaw hurts on the left, a man goes to the dentist, doctor on his profile did not find any finds and begins to heal - and the patient, meanwhile, is developing a heart attack. After two or three days there will be visible to his clinic. Sometimes preinfarction pain occurs in the stomach, especially if a person has gastritis, peptic ulcer disease. Very often it heartburn. Not always the beginning of a heart attack is associated with painful sensations, especially in the elderly. Vessels already rigid, brittle, and the pain does not occur. Often, the patient suffers a heart attack "on their feet" and learns about it only a few years on the ECG.

There is also a form of arrhythmic heart attack: a person just gets off the pulse, he is trying to somehow cope with it without going to the doctor. Suddenly vozniknuvshey breathlessness, rattling in the chest may also mark the beginning of myocardial infarction. Therefore, in all such cases, the change being that you can not explain, you must consult your doctor and make a cardiogram or call an ambulance.


Get rid of the pain

Pain in the region of the heart can not be tolerated, it should benecessarily be cropped, or you may develop cardiogenic shock. This pain is the body is not able to endure longer, and the brain gives the "all clear": the patient falls sharply pressure, he loses consciousness - the situation is critical (if not urgent assistance, death is possible).

In the case of pain in the heartmust first of all stop moving and take a comfortable position. If a person knows that he had coronary heart disease, he must necessarily carry nitroglycerin. If tablets (to be taken one) does not relieve an attack, you need to call the "fast" to doctors intravenous injections of analgesics or other drugs - until drugs. Further treatment may be carried out only when the pain is gone. Sometimes, under the hands of no medication - then we can try to fill in 1 hour spoonful of brandy under the tongue.. But if it was a relief, relaxing still not worth it - it is necessary to consult a doctor. The action of alcohol such that, following the expansion of the coronary arteries in just a few hours they will spasm, and the condition may worsen.

The main cause of heart attacks - atherosclerosis. This is a disease in which blood vessels are thickened and compacted wall, there are plaques. Now in the world there is literally an epidemic of atherosclerosis. And the reasons for that are two, both very banal: an unhealthy lifestyle and poor environmental situation.

This age-related disease - in men itIt develops after 40. The fair sex are faced with this problem in 55-60 years. At the same time it increases the risk of heart attack and that women suffer worse than men. Atherosclerosis is the most likely to smokers. Nicotine and aromatic resins contained in cigarettes affect the endothelium (inner shell) vessels and lead to the formation of plaque and thrombus in the heart. And you need to quit smoking quickly, not stretching it's fun, because even after quitting people within two years, the risk of getting a heart attack.

Those who suffer from diabetes, you should be especially careful - this disease is high propensity to thrombosis. It is necessary to treat the diabetes itself, a diet to control blood sugar.

It increases the risk of falling ill with a heart attack andliver. Do atherosclerosis develops, it depends on the state of the body. If liver function is normal, cholesterol runs in it a number of the necessary changes, if broken - it is not absorbed, and form plaques.


Rapid pace of a heart attack

To prevent a heart attack to declare warinactivity. When you move, the blood circulates through the arteries runs. Contrary to popular belief, jogging is not very beneficial for the heart, which while running as if shaken in a bag - and this excessive stress. Heart more "likes" walking - cardiologists recommended to pass a half a kilometer per day a brisk pace in the fresh air, preferably in the morning, when less fumes. Very helpful and cycling. Generally, all types of physical activity that are not associated with shaking body positively affect the heart and blood vessels.

It should be remembered that an excessive load can trigger myocardial infarction. To determine the border, which is better not to move, there are special tests.

When the patient is pedaling veloergometrybicycle and treadmill at the sample is raised up slightly angled treadmill. In both cases, both written ECG, heart rate controlled and well-being. After that the doctor will call for optimum patient's pulse for training. If you have coronary heart disease or other cardiovascular disease, so it is best to determine your rate. Now treadmills treadmill in almost all Cardiology.

Hypertension - is another risk factor, as it always increases the load on the left ventricle of the heart and coronary arteries.

Excess weight also increases the risk of heart attack. However, drastic weight loss do not advise any doctor, because it is always stressful for the body. From the point of view of physiology, harmonic loss is not more than a pound a week. If a person has limited itself to fatty foods, not eats at night, a lot of moves - the weight itself will slowly decrease.


Are you at risk? Take action!

1. If you smoke, the best way to reduce the threat to a minimum - quit!

2. Hypertension necessarily need to be treated. If you think that high blood pressure norm for you and you feel good at the heart of the load still increases. To avoid stroke or heart attack, you need to reduce the pressure. The upper limit of normal - it is 140 over 90 mm Hg. Art.

3. Suffering from diabetes need to pay special attention to blood pressure. The lower it is, the pressure to achieve luchshe.Rekomenduyut below 130 to 80 mm Hg. Art.

4. If you have too high cholesterol level in the blood, this must be addressed. In certain indications appointed chemicals that reduce it.

5. If you already have cardiovasculardisease, keep it with a drugs, relieves spasms of the coronary arteries: nitroglycerin or its derivatives. Medications should be taken if you feel pain.

6. Coronary angiography. If it turns out that several of the arteries affected plaques will be offered surgical treatment (such as stenting) - before the onset of the disease. And the patient continues to live and work without fear of a heart attack.

7. Do not worry. Occasionally heart attacks can occur against a background of healthy blood vessels from stress alone. Usually, there is another physiological reason, but the trigger for heart attacks more often it is stress.

Women from atherosclerosis protects the hormone estrogen,which helps cleanse the walls of arteries. Therefore, in women the disease can develop after menopause: hormone levels decline, and have nothing more to protect vessels


The threat of heart in your plate

To reduce the risk of atherosclerosis,you need to eat a balanced way. Reduces the consumption of animal fats (butter, eggs), giving preference to vegetable oils and seafood. Limited in your diet the amount of salt and refined sugar. For someone who is already suffering from cardiovascular diseases, the rate of salt a day - a teaspoon without slides. Thus it is better to add some salt already cooked food rather than cook, fry or stew with salt. If you ate a pickle or a piece of salted fish, the daily dose for podsalivaniya other foods naturally decreases.

It is proved that the weight loss of 10 kg in hypertensives the blood pressure itself is reduced by an average of 5 mmHg. st., which greatly reduces the risk of myocardial infarction.