White blood cells are formed elementsblood, the main function of which is to protect the body from foreign agents. The number of leukocytes in the blood is an important diagnostic feature.

White blood cells (white blood cells) - a uniformBlood elements whose main function is to protect the body from foreign agents (toxins, viruses, bacteria, dying body's own cells, and others.).

leukocytes Education (leucopoiesis) takes place in the bone marrow and lymph nodes. There is a concept WBC, which includes 5 types of leukocytes:

Physiological increase in white blood cells(Physiological leukocytosis) occurs for example after a meal (so it is advisable to carry out an analysis on an empty stomach), after exercise (not recommended physical effort to blood sampling) and afternoon (preferably blood samples for the analysis of exercise in the morning), with stress, exposure to cold and heat. In women, the physiological increase in white blood cell count observed in the premenstrual period, during the second half of pregnancy and childbirth.

Leukocyte formula - the percentagethe ratio of different types of leukocytes. The morphological features (type of nucleus, the presence and nature of cytoplasmic inclusions) distinguish 5 main types of white blood cells: 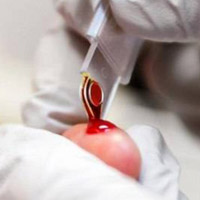 In addition, varying degrees of leukocytesmaturity. Most forms of mature leukocytes progenitor cells (Young, myelocytes, promyelocytes, form blast cells) as well as plasma cells, young nuclear erythroid cells and others. Appear in peripheral blood in case of pathology only.

Different types of white blood cells have differentfunction, so the definition of the ratio of different types of white blood cells, the content of the young forms, identification of abnormal cell forms, a description of characteristic cell morphology changes, reflecting changes in their functional activity, carries valuable diagnostic information. At the same time, changes in leukocyte counts are not specific - they can be similar in nature with various diseases or, alternatively, changes can occur unlike in the same disease in different patients.

Leukocyte formula is age-related features, so it shifts must be evaluated with the age norm position (this is particularly important when examining children).

In many severe infections, septic andpurulent processes WBC changes by increasing the amount of band neutrophils, as well as the possible emergence of a young forms - metamyelocytes and myelocytes. This change leukogram with an increase in the percentage of young forms of neutrophils is called the shift to the left; increase as mainly due to segmented and polisegmentoyadernyh forms (occurs when megaloblastic anemia, kidney disease and liver condition after a blood transfusion) - referred to as the right shift. Significant rejuvenation of cells (in the presence of blood was metamyelocytes, myelocytes, promyelocytes, blasts) may indicate chronic leukaemias; erythroleukemia; myelofibrosis; metastasis of malignant tumors; acute leukemia. In such cases, to talk about leukemoid reaction.

It should be borne in mind that the WBCIt reflects the relative (percentage) of different types of white blood cell count, and an increase or decrease in the percentage of lymphocytes may not reflect the true (absolute) lymphocytosis or lymphopenia, and be the result of the reduction or increase in the absolute number of white blood cells of other species (usually neutrophils).