Barley. Barley to the eye - not just uncomfortable sore, it is a purulent inflammation.
You can carry contamination with non-compliance with the rules of hygiene, in contact with dust in the eyes ... Discover why the eyes appear barley. Stop the disease!


Barley. Barley to the eye - not just uncomfortable sore, it is a purulent inflammation. It is extremely inflamed eyelids, become infected hair follicle or sebaceous gland. Symptoms of barley is unlikely to explain the popular - they are known to many. Edge first century itching, swelling and then appears in 2-4 days formed a yellowish head at its apex. If it's open there pus.

To learn how to properly treat barley known to few. And only a few are turning to this problem to the doctor. Basically treat recipes collected over the telephone from girlfriends or in the smoking room. And what did not hear from the "good" advisers. Good lotions from herbs, do you also offer a treat urine! Perhaps if to remind you that the urine - a waste of the body, stop you from such a hasty decision. 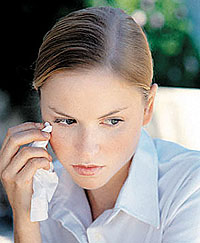 To combat the problem, it is logical to find outwhy it arose. It is believed that the barley comes from for hypothermia. But in fact it is caused by a bacterial infection, in other words, from the dirt. It is not contagious. There are people who for some reason greater risk to catch barley.

Women are more likely to suffer from this disease than men. The explanation is simple - they are more likely to touch the eyes when applying makeup. In this case, only simple hygiene rules will help - to use only their own makeup, wash your brushes and applicators for applying makeup. Children also often ill - also due to non-compliance with the elementary rules of personal hygiene. It is likely to carry infection and "grow" barley, if you use a dirty towel, wiped his eyes with dirty hands, or if you hit a mote.

People in an organism which lacks vitamins A,C, and B, who are rarely in the open air in the same risk more than others. The emergence of barley is also related to personal immunity and heredity. Barley as it sends a signal that your immune system has problems. Often, the root cause may be a tick on the eyelashes - Demodex, various chronic diseases, most of the gastrointestinal tract, diabetes.

Prevention - is compliance with the rules of personalhygiene. Do not touch with dirty hands to his eyes. Use only need personal cosmetics and personal towel. And, of course, to maintain their own immune system, - take vitamins, and then barley you will no longer be disturbed.