Celiac disease is one disease, the only treatment which is diet. What you can and can not have people suffering from celiac disease? Answer know the author of this article.


What is celiac disease

Celiac disease (also known as a diseaseHerter; nostras sprue, sprue celiac disease) - a chronic disease of the small intestine characterized by poor absorption and occurs due to intolerance to gluten, the consumption of which is absolutely contraindicated for people suffering from celiac disease. Foods containing gluten, cause a reaction which gives serious intestinal mucosa, the atrophy causes the intestine and prevents the absorption of nutrients.

The disease is more common in women than men; It can occur at any age, usually in the thoracic and women aged about 35 years after the first or second pregnancy.
In children, gluten intolerance is primarilyall intestinal disorders: diarrhea, vomiting, anorexia, bloating. Poor absorption can cause a deficiency in the body such important elements as iron and vitamins.

In adults, the disease may be manifested in less severe symptoms such as fatigue, as such or in the proximity of intestinal symptoms, such as anemia and osteoporosis.

The cause of gluten intolerance can be both exogenous factors (gluten) and endogenous (genetic predisposition).

Gluten, which is harmful to susceptiblehumans, is found in many cereals, such as wheat. Gluten class encompasses plant protein contained in wheat, barley and rye in.
Rice and corn gluten-free diet are used in patients with celiac disease.
Recommended that the genetic control of the disease, whose clinical symptoms can be very varied, because 8-10% of relatives of people with celiac disease also suffer from this disease.


Cereals: to eat or not to eat 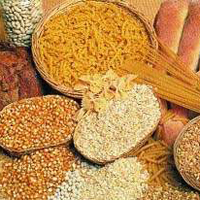 Currently, the only known methodthe treatment of celiac disease is a diet that does not contain gluten. In nature, gluten is found only in certain cereals: wheat, barley, rye, sorghum. So, are prohibited: flour, starch, semolina, flakes above cereals, bread, common and special, breadcrumbs, pasta and all their varieties, biscuits, crackers, biscuits, cakes, pizza, cookies, pies, cakes, bran, potato gnocchi, malt, corn flakes with malt, muesli, cereals and grains mixture.

Foods that should be used with caution: Saracen oats and barley.

Oats - a cereals, cereal Saracen -This bean, and both usually do not contain gluten. In the past, oats was considered harmful for patients with celiac disease, whereas recent studies have shown that daily and prolonged use of significant quantities of cereal does not bring damage intestinal mucosa in patients with celiac disease and causes similar symptoms. However, it should be understood that most of the products made from oats, commercially occurring, usually contaminated with gluten during processing, as well as cereal Saracen.

Gluten can be found in many ready-madeproducts, so people with gluten intolerance need to know their exact composition, indicated on the label and the label, which guarantees their safety. Current legislation requires to indicate each ingredient, while it is not mandatory to 25% of the world.

Thus, this standard can not beno guarantee. World Commission on Food Code in July 1999, approved the document, which recommends that the labeling should indicate all the ingredients that can cause hypersensitivity, including all cereals containing gluten: wheat, barley, rye, spelled and their derivatives.

The recommendations of the commission until CODEapproved by the Italian Parliament. However, the Italian Parliament approved the European Directive relating to wheat starch, which requires labeling to indicate the origin in the use of starches, as they may contain gluten. It is also an indication of the origin of the vegetable to be for modified starches which may contain gluten.