The concept of hereditary diseases

The division of hereditary diseases in the two groupsnot formal. Gene mutations are passed from generation to generation, in accordance with the laws of Mendel, while the majority of chromosomal disease is not inherited at all.

Diseases with hereditary predispositionmay be monogenic (inherited one gene) and polygenic (multiple genes are inherited). Their implementation is not enough to appropriate the genetic constitution of the individual - need more factor or set of factors of the environment, "trigger" the formation of a mutant phenotype (or manifestations of the disease). With the impact of environmental factors is realized genetic predisposition. 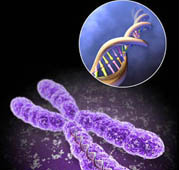 Genetic diseases somatic cells isolateda separate group of hereditary diseases. The reason for this was the detection of malignancy of specific chromosomal aberrations in cells that cause the activation of oncogenes (genes responsible for the development of cancer tumors). These changes in the genetic material of the cells are the main factor for malignant growth and can therefore be categorized as a genetic disease.

Today, there are already early evidence,that the outbreak of congenital malformations are the result of mutations in somatic cells in the critical period of fetal development. Therefore, such cases can be considered as a genetic disease of somatic cells.

It is very likely that autoimmune processes and aging can be attributed to the same category of genetic disease.

Diseases arising from the incompatibility of mother and fetus by antigens

Diseases arising from the incompatibility between the mother andfetal antigens on, developing as a result of the mother's immune response to fetal antigens. fetal blood in a small amount enters the body of a pregnant. If the fetus has inherited from his father a positive Rh factor, which is not present in the mother's blood Rh negative mother, the pregnant body responds immune response. Antibodies mother, penetrating into the blood of the fetus, causing his immune conflict. The most typical and well-studied disease of this group - hemolytic disease of the newborn, resulting from the incompatibility of blood between mother and fetus.

In general, this group makes up a large part of the disease and often occurs in practice, an obstetrician-gynecologist and medical-genetic consultations.