Endometritis - an inflammation of the innermucous layer of the uterus. Calling it the ability of different microorganisms and combinations thereof. Penetrating into the uterine cavity, pathogens are introduced in its mucous membrane, and develops an acute inflammatory reaction.


The uterus of a woman is reliably protected from getting into itinfections. The acidic environment of the vaginal secretion and the alkaline reaction of cervical mucus also stand in the way of infection. In addition, the cyclical renewal of the mucous membrane of the uterine cavity during the menstrual cycle helps to cleanse the uterus from pathogens. The mucous membrane of the uterus of a healthy woman is less accessible to infection in her than other organs of the reproductive system. However, with a weakening of protection, or a decrease in general immunity, pathogens can still penetrate the uterine cavity and cause its inflammation.

The causes of endometritis

The penetration of pathogens inthe uterus may occur during the month of vagina. During menses cervical canal is slightly opened to release menstrual blood and microbes from the surface of the vulva and vagina easily fall out of the uterine cavity. This may contribute to sexual intercourse and douching during menstruation. Sometimes the infection can be entered into the uterus during the abortion, medical manipulations, in childbirth or in the postpartum period, if the instruments are broken decontamination rules, the surrounding area or the staff hands. But more often the occurrence of endometritis after surgery occurs in women who have hidden genital infections. 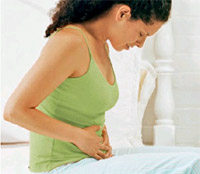 Penetrating into the uterine cavity, diseasemicroorganisms embedded in its mucous membrane, and develops an acute inflammatory reaction. The mucous membrane of the uterus thickens, swells, turns red, there ulceration on its surface. Because the uterus begins to stand out copious purulent discharge. If the inflammation spreads further to the muscle layer of the uterus and then (Options), the uterus increases in size, becomes flabby and sharply painful.

Deteriorating and general condition of the woman. Increased body temperature, there is a malaise, weakness, chills. Begin to worry dull nagging pain in the abdomen, which is often given to the sacrum and hips. Damaged inflammation, mucous membrane of the uterus begins to be torn away in places and it shows the appearance of blood in the purulent discharge and sometimes bleeding not related to menstruation. Themselves become painful menstruation, heavy, their duration increases. In addition, keep in mind that if a woman is the intrauterine device, its presence in the uterus may weight the course of the disease. When endometritis spiral always removed.

Sometimes, during menstruation, with the mucous of theShe removed and pathogens and then in rare cases it is possible self-healing of endometritis. If within 2-3 menstrual cycles do not take any treatment, acute symptoms subside and endometritis becomes chronic. Then the symptoms of the disease become less bright, but constant. Often the only signs of chronic endometritis are the absence of pregnancy, miscarriages, menstrual dysfunction and minor nagging pains in the abdomen.

To sum up, the main complaints of women duringacute endometritis are: fever, weakness, fatigue, presence of muco-purulent discharge, often mixed with blood, the occurrence of intermenstrual bleeding, lengthening, strengthening themselves and the emergence of regular monthly pulling dull lower abdominal pain radiating to the lower back or hip. If this is your concern - to urgently go to the gynecologist.

Complex examination for suspected acuteendometritis does not differ from that for all inflammatory diseases of the female genital organs. These are smears and cultures of the vaginal and cervical canal to identify pathogens and study their sensitivity to antibiotics. With a two-handed vaginal examination, the detection of a slightly enlarged, soft, and painful uterus will speak in favor of endometritis. Recognition of the disease in the acute stage, combined with the presence of purulent discharge from the uterus and menstrual irregularities, data from a woman's survey (previous intervention on the uterus, staging of the intrauterine device, chronic inflammation of the genital organs, etc.) is not difficult. Diagnosis of chronic endometritis is more complicated and requires hysteroscopy (examination of the uterine cavity through a special optical device - a hysteroscope) and diagnostic curettage, followed by examination of the material obtained. These examinations are carried out already in the hospital, and not in the antenatal clinic.

Thus, the survey is completed, the diagnosis is set - endometritis. What kind of treatment offers modern medicine?

Once endometritis arose, that is, in the acutestage of the disease, the woman assigned antibiotic therapy with obligatory taking into account the sensitivity of the isolated microorganisms to antimicrobial drugs. In addition, drugs may be administered to reduce pain and reduce fever. Next, apply medication to restore the normal vaginal microflora, physical therapy, drugs that enhance the body's immune defenses and vitamins.