How to act quickly and effectively when developing a food allergy with the threat to life and how to distinguish the most dangerous state. 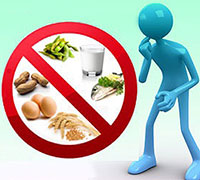 Food allergies - one of the most common diseases of our time.
The worst factor is that its mechanisms and causes of formation
We are still not fully understood. However, the picture is quite typical
food allergies, especially in situations when you need emergency assistance.
We'll talk more about how
It looks like a food allergy.

What is a food allergy

Such manifestations of food allergy as a rash or itching deliver a lot of unpleasant moments, but still
They are relatively safe for life and often do not even require
symptomatic treatment. Do not lose sight of your state of health in
If skin symptoms has been steadily growing, because they can be replaced and
more dangerous conditions.

there are three
situations which require quick response and treatment of food allergies in adults and children,
immediate challenge physicians and possible provision of support activities
on its own - it is angioedema, bronchial asthma attack and anaphylactic
shock.

Learn angioedema is not difficult. This asymmetrical soft tissue swelling
face and neck, rarely - upper extremities, sometimes with symptoms of hives on the skin.
As a result, the person "swims", which in itself is not dangerous. However, if the edema
Angioedema appears rattling, wheezing
breathing or coughing, then we are talking about the compression of the swollen throat
tissue that carries a risk of a complete overlap of the respiratory tract. So
how to provide assistance at the stage of complete obstruction is difficult even to physicians, the start time
Action is of paramount importance.

Anaphylactic
shock outwardly looks like
food allergy, but rather as all other known shocks and
recognize its allergic nature is often difficult. Hint can give the use of
obviously allergic food immediately prior to the event, pairing
status with other allergic symptoms - angioedema, urticaria,
asthma attacks. The essence of the shock is a sudden drop in pressure,
accompanied by disturbances of cardiac activity (from the fast surface
"Filamentous" pulse to severe
arrhythmia), loss of consciousness, respiratory depression secondary. Algorithm
assistance for all kinds of shock is similar, but it is important and correct the root cause of it.

The attack of bronchial
Asthma is characterized by a no less vivid manifestations - is wheezing on
expiratory chest meow like a cat and it is audible even at a distance, the patient
sits tilted forward and the whole body is trying to alleviate shortness of breath,
may develop cyanosis of the lips. 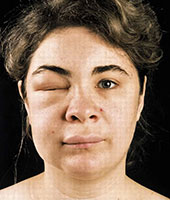