Rabies - a viral disease that occurs after the bite of an infected animal. How does rabies in humans? On this you can learn by reading the article.

Pathogen - a virus acting on the nervous system,
that little stable in the environment. When he is killed by boiling
2 min, rapidly inactivated solution of Lysol, chloramine, carbolic and
hydrochloric acid. The corpses of animals is maintained up to 4
months.

Rabies refers to a group of diseases, pathogens which are in the process of evolution adapted to parasitism in the body. Suffer all warm-blooded animals. The main source and
reservoir of the virus are wild carnivores (foxes and wolves) and
Pets (dogs, cats) are allowed. Infection of animals and humans
It comes in contact with saliva on broken skin or mucous membranes
shell and bites rabid animals. The causative agent of rabies
accumulates and is excreted through the salivary gland not only during
disease, but also in the incubation period of 24-72 hours, and sometimes for 7-8 days
until the first signs of the disease.

are Atrium
damaged skin and mucous membranes. The wound along nerve virus
fibers penetrate into the central nervous system, and concentrated in
certain parts of the brain and spinal cord, causing them to defeat.
Selectively affects the nerve cells of the hippocampus, medulla oblongata,
cranial nerves, the lumbar portion of the spinal cord and major components of autonomic plexus. From the central nervous system by the virus spreads
nerve trunks throughout the body, including in the salivary gland.

As a result, virus propagation occur inflammatory and necrotic changes in the nervous system.

The incubation period lasts from 8 to 90
days, at least 1 year, more often 20-30 days. Short incubation notes
the bite of the head, face and hands, the longer - the bite lower
extremities. 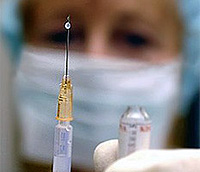 However, muscle spasms are reiterated,
follow one another at the slightest irritation. Under excitation
the temperature rises to 40-41 ° C. The voice becomes hoarse, appear
profuse salivation, sweating. As the disease advancing
paralysis. Psychomotor agitation and convulsions subside, the patient
calms down. He can eat and drink water. develops
weakness, paralysis of limbs appear, impaired function of the pelvic
authorities, the temperature rose to 42 ° C, death occurs from paralysis
heart or respiratory center. The blood is determined by neutrophilic
leukocytosis (increase in the number of neutrophils in the blood), Aneozinofiliya (the absence of eosinophils in the blood)In urine - a protein, sugar, acetone.

Sometimes there are atypical forms of rabies: bulbar, paralysis, cerebral, cerebellar. at
atypical forms of agitation and mild disease hydrophobia
or absent. Death occurs 6-8 day illness, and sometimes
During the 1st day.