Home>Oncology>Atheroma. How to find and how to treat

Atheroma. How to find and how to treat

Atheroma - a cyst filled with a secret in the form of curd. Formed by blockage of the sebaceous gland excretory duct.

Atheroma - a common problem that occurs inpeople of all ages and both sexes. What is the essence of this disease? It's not a tumor, a cyst, that is, atheroma is a "pouch", and having a capsule filled with thick yellowish masses, often have an unpleasant odor. Formed as a result of blockage of ductless glands curdled discharge greasy. Atheroma develops in the rich parts of the sebaceous glands of the skin (scalp, face, back, anterior abdominal wall). Most often atheroma occurs on the scalp, on the face, back, in the form of painless rounded form dense formations on the skin. When inflammation of the skin over it is red, cyst size increases, it becomes painful. 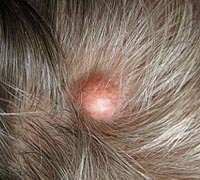 It can be located in various locations of the body,usually on the face, scalp, trunk, arms, on the scrotum. atheroma is often multiple. It is a tumor formation rounded, soft consistency of 5 to 40 mm and more. The skin over the atheroma is usually not changed, but in the case of joining a secondary infection vospavleniya may have a reddish tint.

Atheroma is movable together with the surrounding tissues,painless. Atheroma may remain small for many years, or grow. Sometimes it reported atheroma from the skin surface through a small opening through which can be separated atheromatous mass (curdled, odorous). atheroma suppurate Often, in addition, may be atheroma gap in the subcutaneous tissue.

If the atheroma is small and does not bother the patient, it can not be removed. In other cases, surgical treatment. Atheroma removed under local anesthesia (anesthesia).

In appearance of atheroma and lipoma are very similar. To distinguish their doctor can only by circumstantial evidence. So, lipoma, usually located in places of accumulation of subcutaneous fat, and atheroma - in places of the greatest concentrations of sebaceous glands; also with careful consideration in atheroma there are traces of ductless - occluded sebaceous glands. At the touch of the formation of similar consistency, but while the atheroma is part of the skin, a lipoma - a subcutaneous education, not soldered to the surface of the skin.

Factors predisposing to the development of atheroma,traditionally considered to be adverse environmental conditions and metabolic disorders (chronic trauma, hyperhidrosis, hormonal dysfunction and so on.) Typical localization - the face (eyebrows, the area of ​​nasolabial triangle, chin, parotid region), scalp, back of the neck, armpits , interscapulum, perineum, labia, scrotum. Elements of atheroma may be several, and in different areas. 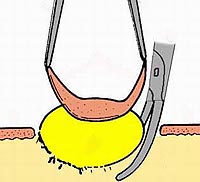 Removal of atheroma may either surgically (resection followed by the imposition of cosmetic sutures), or, in a small package cysts, removal by laser.