How are the exercises after the amputation? What do the exercises? What kind of exercises to be performed after prosthetics? The answers to these questions can be found in the article.

After amputation occursrestructuring of motor skills, develop compensatory adaptability, possibilities which are determined to a large extent the strength and endurance of the muscular system. In this regard, the important role played by physical therapy, as in the formation of the stump, and in preparing them for primary prosthetics and training in the use prosthesis.

In the early postoperative healingexercises aimed at the prevention of postoperative complications, improve blood circulation in the cult, stimulating regeneration, prevention of muscle atrophy and stump pain reduction. Contraindications to the appointment of medical gymnastics: acute inflammatory diseases of the stump, general grave condition of the patient, high body temperature, risk of bleeding and other complications.

With 2-3 days after amputation is prescribedgeneral developmental exercises for healthy limbs, breathing exercises, isometric muscle tension for the remaining segments of the amputated limb and truncated muscles, facilitated movement in the free limb immobilization of the joints, relaxation exercises specific muscle groups.

With 5-6-day use phantom gymnastics(Mental performance of movements in the absence of the joint). In addition to these exercises, after the amputation of upper limb patient can be rotated to the side, sit down, get up on the operated limb without support. 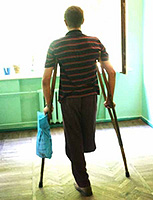 After amputation of the lower limb atsatisfactory general condition with a 3-4-day the patient can take a vertical position. Physiotherapy aims to balance training and support ability of a healthy foot. Along with the general developmental exercises, performing movements with the load on his good leg, train the vestibular apparatus, practiced in equilibrium.

When one-sided amputation patients enrolledwalking with two crutches, with two-way - the transition to self-carriage and the movement of it. Formation of motor skills has a positive effect on the psyche of the patient and makes it easier to care for.

After removal of sutures therapeutic exercises aimedthe preparation of a prosthetic stump. To do this, you must restore the mobility of the proximal joint, normalize muscle tone in the cult, to strengthen the muscle groups that produce motion in joints and prepare the upstream segments of the limbs and trunk to mechanical impact liners, fasteners and rods prostheses improve the muscle-joint feeling and coordination of combined movements, active relaxation, improve the forms of motor compensations.

Of paramount importance is the restorationmobility in the surviving joint amputated limb. With decreasing pain, increasing mobility in the remaining joint in lessons they include exercises to strengthen the muscles of the stump.

When amputation lower leg, for example, should be strengthenedextensor knee amputation hip - flexors and abductors of the hip muscles. In the development of muscle-joint senses and movement coordination is important not so much the exercise itself, as the method of its implementation. For example, the abduction of the shoulder joint can be used to increase the mobility in it (dynamic mahovye free exercise), for the development of muscle strength (exercises with weights, resistance), to train the muscle-joint senses (an exact reproduction of a predetermined amplitude without the control of). Much attention should be paid to developing the skills of daily living stump with special tools, the simplest of which is a rubber collar, worn on the stump. Under the cuff is inserted pencil, spoon, fork, and so on. D.

After amputation of limbs may develop postural defects, so it is necessary to use corrective exercises, taking into account the characteristic changes of posture.

After amputation of the lower limb significantlybroken body statics, t. e. the center of gravity moves to the side to save the limb, causing changes in the voltage of the neuromuscular system, necessary to maintain balance.

The result is a pelvic tilt to the side, where there is no support, and continuing in the presence of the prosthesis. Tilting of the pelvis, in turn, entails bending the spine in the frontal plane.

Overload healthy limb, in particular,arch, leads to the development of flat feet, so it is advisable to use the exercises aimed at strengthening and development of the neuromuscular apparatus of the foot. By standing and walking training on medical training prostheses start 3-4 weeks after surgery. When using temporary prostheses motor skills are developed to facilitate the transition to walking on a permanent prosthesis. Walking on the therapeutic and prosthetic training has a positive effect on the stump, accelerating its formation.

Starting position - lying on his back:

Starting position - lying on the healthy side:

Starting position - lying on his stomach:

After the supply of the upper limb prosthesesphysiotherapy aims to use the skills of the production of prostheses. The form and nature of the movements required for a particular skill, are caused by the type of prosthesis. The learning method specific sequence must be followed. First of all, the patient must learn to put on and take off the prosthesis. When the first switched traffic proximal joint, the distal and then, for example, raising the prosthesis (prostheses) sideways, forward, denture brush podnesenie mouth.

When learning of considerable movement of prosthesesvalue is the initial position of the body. So, it is advisable to first educate the taking and retention of subjects standing, then sitting, on the edge of the table and directly from the table.

After the supply of lower limb prosthesesyou need to start training the patients walking on prostheses. At all stages of learning the movement of a prosthesis are the general tasks: adaptation to the prosthesis, strengthen pelvic muscles and limb, prosthesis training management, training coordination of movements, eliminating truncated limb contractures, muscle strengthening and relaxation preserved limbs, training orientation in space. Private tasks depend on the stage of learning mobility. 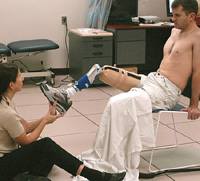 In the third stage are produced uniformstepping movement and rhythmic gait is coordinated with the same moving forward. Patients learn walking on an inclined plane turns in walking, walking with obstacles, walking on stairs and uneven terrain. Besides basic exercises, using elements of volleyball, basketball, badminton, table tennis, special exercises on the sports wall and a rowing machine.

Improved method of amputation and prosthetic development led to the creation of a new method, which is called a prosthesis on the operating table, or express prosthetics.

The main advantage of this method in amputationslower extremities - reduction of terms of rehabilitation. Early walking on medical training prosthesis (the first days after the operation) promotes more rapid patient adaptation to the new conditions of life, the formation of the new movement patterns, has a positive effect on the patient's psyche.

By the 7th day can replace cane crutches. After 2-3 weeks, impose a permanent prosthesis. Objectives and methods of medical gymnastics at the express prosthetics are as described above, in conventional prosthetics.