Helminthiases trematodozov from the group, strikingliver and pancreas. The causative agent of the disease is a fluke «Clonorchis sinensis» - Chinese clonorchiasis, its dimensions vary from 10 to 20 mm.


Clonorchiasis widely distributed in China, Japan, the Korean Peninsula. In Russia, found in the Amur River basin. Mature forms of parasites in humans and fish-eating mammals.

Intermediate hosts klonorha in two: the first shellfish «Bithyniiadae» family, and the second - the fish of the carp family, which are the source of the disease to humans. 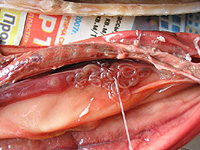 
The forms of existence

Metaschistosome klonorha (infective larvae stage)Entering the human gastrointestinal tract,freed from its shell and penetrates into the gallbladder and pancreas, where it dwells. The eggs of the parasite in the bile and pancreatic juices enter the intestine and are excreted in the faeces. egg hit the water ingested by the parasite in fish and shellfish. Man eats contaminated fish, and dissemination klonorha cycle continues. The life of the parasite is 25 years or more.


The effects of parasitism in the body

The first object of settling the liver is more likely. Klonorh as all flukes, tissue embedded in the liver, blood filtering, and feeds it. In this general intoxication develops rising bilirubin level in the blood, decreased blood protein, myocarditis, pulmonary infiltrates, pneumonia develops.

Diagnosis of acute mounted on clonorchiasisBased on clinical, epidemiological history data (for example, stay in the regions spread clonorchiasis), confirmed by parasitological studies on helminth eggs in feces, duodenal contents (possibly discover through 1-1.5 months after the invasion).

The treatment takes place in three stages, as in epistorhoze. Degelmintezatsiyu carried out with praziquantel.

Prevention consists in the removal of fishcarp species by salting, thermal treatment (thorough provarivaniya or frying), prevention of discharge and flushing of sewage and industrial uncleared fish waste into bodies of water, use of molluscicides.