Home›Endocrinology›Diagnosis and treatment of autoimmune thyroiditis

Diagnosis and treatment of autoimmune thyroiditis

Aukoimmune thyroiditis is one of the most common thyroid diseases. Violation of this small gland is able to withdraw from the whole organism. Therefore, the total ratio and human health depends on the timely diagnosis and treatment of this disease.

An autoimmune thyroidite is a chronic disease of the thyroid gland, characterized by autoimmune inflammation, often outcome in hypothyroidism.

What the term means «Aukoimmune»? This means that the aggressiveness of the immune system, the norm exhibited in relation to other people's cells, is directed against its («AUTO» - myself). In this case, against the cells of the thyroid gland, thyrocytes.

Mechanisms for the development of the disease

The mechanism of immune aggression is very complicated, but still try to explain this phenomenon of.

In order to understand its in front of it or someone else, the immune system has learned to recognize different proteins from which any live cell consists. Development of proteins is engaged in an immune cell called Macrofag. Macrofag contacts with different cells, resulting in recognition.

Having understood with whom it deals, macrophage reports to his comrades for the immunity of T-lymphocytes. T-lymphocytes are different. It is important for us to know two types of T-cells: T-helpers, which allow aggression, and T-suppressors, which, on the contrary, it is prohibited. If the permission to attack is obtained from T-helpers, then the team comes «in troops» - NK cells, T-killers, macrophages. These cells kill a stranger, directly contacting him. In this case, the interferranes, interleukins, active forms of oxygen and other aggressive substances are produced.

Among «immune troops» there is another acting face. It's in lymphocytes. Their main difference is that they are in response to alien proteins (antigens) can produce antibodies. Antibodies are very specific to antigens, and only associated with them. As soon as the process of binding an antibody with an antigen in a foreign cell membrane, an immune complex is formed. This moment is a signal to activate a special aggressive immunity system - Complement Systems.

In relation to autoimmune thyroiditite, it can be said that the disease is developing due to the distinguishing. That is, its protein of the thyroid cell is recognized as someone else with all the consequences.

It was discovered that such a violation could be laid in a man's genotype from birth. In the same way, there is a predisposition to the low activity of T-suppressors, which should slow down the aggressive reaction of immunity.

These antibodies are determined in blood when diagnosis. Tombocytes who died or damaged as a result of an autoimmune process are no longer able to produce hormones. Their level in blood gradually decreases. Hypothyroidism is formed, the symptoms of which we already know.

The main manifestations of the disease

It is necessary to say that patients with autoimmune thyroid with the preserved gland function (euthyroidism) are practically nothing complaining. In the worst case there are minimal discomfort in the neck in front, bad tolerability of a high collar, dislike for cervical scarfs and cards. It is quite another thing if there is hypothyroidism. 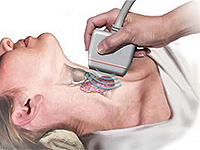 The appearance of the patient with severe hypothyroidism is so characteristic that an experienced doctor can recognize it at first sight, from the first minutes of the patient's appearance in the office.

Such a patient slowly moving. His face is pale, with a yellowish tinge, thoughtful, black features, eyelids. On the cheekbones and at the tip of the nose there are reddish spots of a painful blush that look very typical against the background of a pale face.

In a patient, rare fragile hair, which on the head can fall out of the foci, forming bald sections. Hair falls not only on the head, but also other places - in the armpits and in the pubic area. Sometimes there is a symptom of Hertoga - hair loss of outdoor third eyebrows.

When the patient talks, his face changes little, the facial express. Says the patient slowly, with difficulty picking up words, recalling the name of phenomena and objects for a long time. Patient speech illegible, «Kashi in her mouth scored». Such a violation of speech articulation is due to pronounced edema of the language. The language is large, thick, with traces of teeth on the side surfaces. Because of the edema of the mucous membranes of the nose, the patient breathes his mouth. Often there is shortness.

If you ask what he complains, the patient will answer that it is concerned about pronounced fatigue, poor performance, I want to sleep all day. In addition, he will noted that the memory has decreased and the voice has changed (he has become husky).

Often, patients complain about the lack of an independent chair, have to constantly drink the laxatives, to do enemas.

In addition, women complain about the impairment of the menstrual cycle. Monthly come with a delay of several days, and even weeks. Mestruation scarce. Sometimes there are uterine bleeding.

Menstrual cycle disorders can take a critical character right up to amenorrhea, that is, the complete cessation of menstruation. As a result, infertility develops.

Some patients appear allocations from the nipples of the mammary glands, mastopathy. Men complain of a decrease in sexual attraction and impotence. All patients, as a rule, are bothering dry mouth in the morning without severe thirst. If a child is sick, he is noticeably lagging behind his peers and in growth, and in mental development.

The skin of the patient is dry, with reduced elasticity, pale, with a yellowish tinge, sometimes forms rude folds. On the touch skin rough, cold. On the elbows and on the soles there may be dry plaques (xerosis) and cracks. Pale mucous membranes, glitter reduced them («Dull eyes»).

The thyroid gland is increased (goiter), and often to significant sizes when the neck contour changes. With a long flow of autoimmune thyroiditis with high aggressiveness, hypoplasia of the gland, expressed in a sharp decrease in its volume. In any case, iron is dense to the touch, the contour of it can be uneven, bug, and even define nodes.

The cervical lymph nodes increase infrequently, their dimensions are rarely significant, when feeling painless. Therefore, they usually do not detect them.

For patients with hypothyroidism, a rare pulse is characterized, 60 beats per minute and less often. Blood pressure lowered.

When determining in blood, thyroxine and triiodothyronine levels, they turn out to be reduced, and the thyrotropic hormone is elevated. Antibody levels significantly exceed the norm.

All the symptoms of the hypothyroidism are presented above are characteristic of a fair decrease in blood hormone levels. Such a bright picture occurs infrequently. In most cases, the patient has some set of minimal signs that are nonspecific and far from always recognized by doctors as hypothyroidism. And indeed, the symptoms are nonspecific: increased fatigue, reduction of memory, drowsiness, leaning to the constation, tendency to increase body weight. At the same time, thyroxine and triiodothyronine levels are normal, but thyrotropic hormone is elevated. Such a condition is called subclinical hypothyroidism. In this case, the term «Subclined» means «Floously manifested outward».

Based on the clinical picture and data of laboratory research. Availability among other family members of autoimmune diseases confirms the possibility of autoimmune thyroiditis. With a laboratory study, the presence of antibodies to various components (tyroglobulin, peroxidase, second colloidal antigen, thyroidism, thyroidines, antibodies to thyroid hormones, etc.) thyroid gland.

Laboratory diagnostics of autoimmune thyroiditis also includes, in addition to the definition of general and free T3 and T4, determining the level of TSH in blood serum, when there is no clinical symptoms and signs. Increasing the level of TSH content.T4 indicates subclinical hypothiosis, the presence of clinical signs of an increased level of TSH with a reduced concentration of.T4 - clinical hypothyroidism.. If the tutor of antibodies to the Tyroglobulin in serum is 1: 100 and above, and the titer of antibodies to thyroid peroxidase is above 1:32, then no doubt we can say that the surveyed has autoimmune thyroiditis. In this case, there is no need for biopsy of the thyroid gland. To clarify the doubtful titer of antibodies in the blood, the thin-game biopsy of the thyroid gland is shown, which helps the correct diagnosis

As a rule, the titer of serum antibodies in the blood correlates with the activity of an autoimmune response. If there are clinical data on the possibility of malignant rebirth of the thyroid gland (the development of nodal education), then a thin-game biopsy is needed by a suspicious area, despite the presence of high antibody title. The presence of thyrotoxicosis phenomena in the patient also does not exclude the possibility of malignant rebirth of the thyroid gland. Autoimmune thyroiditis more often has a benign flow. Limphomas of the thyroid gland are extremely rarely found. Sonography or ultrasound study (ultrasound) of the thyroid gland allows you to determine the increase or decrease in its size (volume of the gland in ml) and for autoimmune thyroiditis, a diffuse reduction of its echogenicity is characterized by.

The treatment of autoimmune thyroiditis can be drug and operational. The main method of drug therapy is the use of thyroid drugs (thyroid, triiodothyronine hydrochloride, thyroxine). Thyroid drugs not only eliminate the symptoms of hypothyroidism and reduce the dimensions of the thyroid gland in most patients, but also have a braking effect on the autoimmune process. Removing increased thyrotropic stimulation, these drugs prevent development in patients with autoimmune thyroiditis of thyroid tumors. Therefore, thyroid drugs are recommended to prescribe not only patients with hypothyroidism, but also with euticide state. The dose of thyroid drugs is selected individually under the control of the overall condition of the patient, body weight, pulse rate, serum cholesterol level.

In the absence of decreasing gland against the background of adequate replacement therapy, corticosteroids are prescribed. Course of treatment 3-4 months. Immediately beyond the appointment of corticosteroids inside, they are injected and retrobulbarno.

With suspected malignant rebirth of the thyroid gland, as well as in the presence of compression phenomena (compression of the esophagus or trachea) due to the large size of the gland, operational treatment is shown.