Home›Nervous diseases (neurology)›Signs of meningitis - who are warned, he does not get sick

Signs of meningitis - who are warned, he does not get sick

What is meningitis, the area of ​​its defeat and the main symptoms. Characteristic signs of beginner meningitis, causes that cause severe disease, «Meningial syndrome».

All diseases without exception are dangerous and unpleasant: something to a greater extent, something in a smaller. The degree of seriousness is determined not only by the course of the disease or complications. Difficulties can be in the inability to quickly differentiate it among similar diseases. And when the bill goes on the clock, the correct diagnosis saves the patient life. These caverzny diseases include meningitis.

The disease itself affects the soft shells of the spinal and brain, causing their resistant inflammation. It is subject to all brain shells, vascular brain ventricular beams, adherent brain structures.

Start of illness — Very rapid and sudden, symptoms are similar to conventional flu. Task doctor — fast «to know» terrible ailment, but a patient's task — to turn to the doctor for help.

Meningitis causative agents fall into the brain shell with the most in a variety of ways: through lymph or blood when the focus of inflammation is located close to large vessels or localized in the head area. Possible contact transfer path — With the close location of the focus of inflammation to brain shells: purulent otitis, frontititis, mastoid, brain abscess and other. The probability of infection exists with open-brain and cerebral injuries. If we are talking about meningococcal meningitis, Meningococcus himself dwells in the throat and, passing through saliva, causes only pharyngitis. If the body is weakened, immunity is not able to ensure proper protection of the body, then meningococcus with blood enters the nervous system, contributing to the inflammation of the shells. The most common transmission path — Air-drip.

From the moment of infection in the body and before the first manifestations passes from 2 to 10 days. Symptoms increases, becoming everything is harder every time. It is difficult to distinguish from a cold or flu. Signs of meningitis depend on the cause caused. Severe types:

The manifestations of viral meningitis depend on the source, which caused it. Characteristic meningial symptoms manifest only on only 5-7 days after the start of the disease and are less pronounced.

Tuberculous meningitis most often begins with a strong fever, and after 2-3 days, vomiting opens and strong headaches begin. Meningial signs show themselves only 4-5 days.

Meningococcal meningitis begins with sudden heat and chills. For the first 2 days on the body, a small dark cherry rash appears, disappearing on the 3-4th day. If pneumococcus is guilty in the disease, then the beginning of meningitis is preceded by inflammation of the lungs, otitis, sinusitis. This view is no less dangerous by its lightning development (only 2 hours), often leading to cramps, consciousness disorders.

There is general symptoms that suggests the possible presence of meningial inflammation.

Such a well-known meningitis syndrome 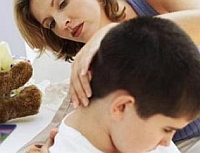 Why the head is spinning