Heart failure - a failure toheart in their full pump (contractile) function, as well as provide the body with the necessary amount of oxygen in the blood. Heart failure is not an independent disease.

In most cases, heartfailure - this is the natural outcome of many diseases of the heart and blood vessels (valvular heart disease, coronary heart disease (CHD), cardiomyopathy, hypertension, and others.). Only occasionally heart failure is one of the first signs of heart disease such as dilated cardiomyopathy. In hypertensive disease can take many years from the occurrence of the disease before the appearance of the first symptoms of heart failure. While the resulting, for example, acute myocardial infarction, death is accompanied by a significant portion of the heart muscle, this time may be several days or weeks. In that case the heart failure progresses in a short time (minutes, hours, days), one speaks of acute heart failure. All other cases are referred to as congestive heart failure. In addition to cardiovascular disease emergence or worsening of heart failure manifestations contribute fevers, anemia, increased thyroid function (hyperthyroidism), alcohol abuse and others.


The development of heart failure

Dates of the onset overt cardiac failureindividualized for each patient and cardiovascular disease. Depending on which suffers the ventricle as a result of disease, distinguish right and left ventricular heart failure.

In cases of right heartfailure excess volume of fluid retained in the vessels of the systemic circulation, thus causing swelling, at first - in the feet and ankles. In addition to these basic features for right heart failure is characterized by fatigue, due to low blood oxygen saturation as well as the feeling of fullness and pulsation in the neck.

Left ventricular heart failurecharacterized by fluid retention in the pulmonary circulation, so that the amount of oxygen entering the blood decreases. As a result, there are shortness of breath aggravated by exertion, and weakness and fatigue.


Complaints of patients with heart failure

Edema is one of the first manifestationsright heart failure. Initially, patients concerned about slight swelling, usually affecting the feet and lower legs. Swelling uniformly affect both feet. Swelling occur in the late afternoon and go in the morning. With the development of edema disease are thick and full in the morning is no longer held. Patients report that they have regular shoes do not fit, they often feel comfortable only in house slippers. Redistributions of edema in the direction of the head increases in diameter hip and thigh. 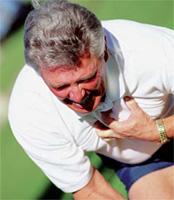 The liquid then accumulates in the peritoneal cavity(Ascites). With the development of hydrops patient usually sits as in a prone position marked a sharp shortage of air. Develops hepatomegaly - enlarged liver in size due to overflow its venous network of the liquid part of blood. Patients with liver increased in size often noted discomfort (discomfort, heaviness) and pain in the right upper quadrant. When blood accumulates hepatomegaly pigment bilirubin, which can stain sclera ( "proteins" eyes) to yellowish color. Sometimes such yellowness frightens the patient, as the reason for seeking medical attention.

Fatigue is a symptom,characteristic both for right and for left ventricular failure. Initially, patients note a lack of strength in the performance of the previously well-tolerated exercise. Over time, the duration of periods of physical activity decreases, and pauses for rest - increases.

Dyspnea is the main, and often the firsta symptom of a chronic left ventricular failure. During dyspnea patients breathe more often than usual, as if trying to fill their lungs with the maximum volume of oxygen. Initially, patients notice shortness of breath only when performing intense exercise (running, fast, climbing stairs, etc.). Then, as the progression of heart failure patients can celebrate breathlessness in normal conversation, and sometimes - and in a state of complete rest. Paradoxical as it sounds, the patients themselves are not always aware of the presence of dyspnea at - its notice people around them.

Paroxysmal cough arisingmainly after the heavy load, the patients are often perceived as a manifestation of chronic lung disease, such as bronchitis. Therefore, the physician survey, patients, especially smokers, do not always complain of cough, considering that it is not related to heart disease. Rapid heartbeat (sinus tachycardia) is perceived by patients as a feeling of "fluttering" in the chest that occurs when a motor activity, and disappears after a certain time for its completion. Often, patients become accustomed to rapid heartbeat, without fixing his attention on him.

Heart failure is a consequence ofvarious diseases and conditions like cardiovascular and other. To establish the presence of heart failure, it is sometimes quite conventional medical examination, whereas for verifying its cause may require the use of a number of diagnostic methods.

Electrocardiography (ECG) It helps doctors to detect signs of hypertrophy andinsufficient blood supply (ischemia) infarction, as well as a variety of arrhythmias. As a rule, these ECG signs may occur in various diseases, ie, They are not specific to cardiac failure.

On the basis of the ECG established and widely used ascalled stress tests, which consist in the fact that the patient must be overcome gradually increasing load levels. For these purposes, use special equipment to dispense the load: a special modification of a bike (bicycle ergometry) or "treadmill" (treadmill). These tests provide information about the reserve capacity of the pumping function of the heart.

The main public and today bydiagnosis of diseases that occur with heart failure, a cardiac ultrasound - echocardiography (echocardiography). With this method one can not only determine the cause of heart failure, but also to assess contractile function of the heart ventricles. Currently, only one echocardiography enough to make a diagnosis of congenital or acquired heart disease, suggest the presence of coronary artery disease, hypertension and many other diseases. This method can also be used to evaluate the results of treatment.

X-rays of the chest heart failure reveal stagnationthe blood in the pulmonary circulation and an increase in the size of heart chambers (cardiomegaly). Some heart diseases, such as valvular heart disease have a characteristic radiological "picture". This method is also, like echocardiography can be useful for monitoring treatment.

Radioisotope methods for heart researchIn particular, radioisotope ventriculography,allows high accuracy in patients with heart failure to evaluate the contractile function of the heart ventricles, including blood volume enclosing them. These methods are based on the introduction and subsequent distribution of radioisotope in the body preparations.

One of the recent advances in medical science, in particular, the so-called nuclear diagnosis is Positron emission tomography (PET) method. This is very costly and ismalorasprostranennyh study. PET allows you to use special radioactive "tag" to identify areas of viable myocardium in patients with heart failure to be able to adjust the treatment.