In the period from 14 April to 31 May 2014, all interested persons can in just 1 ruble to be tested for blood magnesium levels. The program involves all Invitro centers in Moscow and the Moscow region. 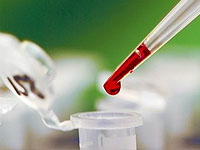 In recent years, attentionresearchers in various areas of clinical medicine drawn to the problem of deficiency of magnesium and its role in the formation of various pathological conditions and processes of the human organism. According to data published by Russian scientists, 30% of Russians earn less than 70% of the daily magnesium needs.

In this case magnesium is vitalelement, which is required for normal cells, muscles, organs and the nervous system. Its deficiency can occur in disorders of diet (diet) or an increase in demand in the macro elements:

A special role magnesium plays in the maintenance of the nervoussystem. It is involved in the regulation of the transmission of nerve impulses, and its deficiency may cause increased cell excitability. That is why the magnesium deficiency decreases the body's ability to resist negative factors, and it becomes more difficult to cope with stress. Clinical manifestations of maladjustment associated with magnesium deficiency, the daily requirement is an average of 300-400 mg / day.

To make up for deficiency of magnesium is recommended to follow a special diet, rich in magnesium. Unfortunately, the daily diet can not always provide the necessary demand for this macronutrient.

How to avoid magnesium deficiency in the body?

"The recommended daily value is in Russiamagnesium intake is for women and men 400 mg. For pregnant and lactating women need higher daily - 450 mg - commented clinical pharmacologist, MD, professor, deputy director for scientific work of the Russian Center for Trace elements of the UNESCO Institute, Professor, Department of Pharmacology and Clinical Pharmacology TMGI Gromova Olga Alexeeva. - This is an important trace element in the body does not produce, so the entire daily intake should come from food and drinking water. It is necessary to enrich your diet with algae, fish, legumes, cereals, dried fruits, bananas, spinach, arugula, broccoli, salad, fruit. Especially rich in fish and magnesium zelenolistnyh plants (spinach, green onions, cabbage). Magnesium many nuts, but the assimilation of them small, especially in children. Many magnesium is also found in natural dark chocolate, and nuts, and chocolate - high-calorie foods, and their passion can lead to weight gain, so they are not recommended for daily consumption. Unfortunately, the daily diet can not always provide the necessary requirement for magnesium, and then come to the aid of magnesium-containing drugs, which help to make up the deficit. It is important that these preparations contain organic salts of magnesium, which are better absorbed. After consultation with the doctor advised to take drugs, which include a combination of magnesium and vitamin B6, which improves the absorption of trace elements from the gastrointestinal tract and its penetration into the cells of the body. "