One of the reasons for discomfort in the ear, hearing loss is cerumen impaction. How to deal with it? Why it happens?

Sulphur Branch - the physiological process. Formed sulfur in special glands. Together with sulfur from the external auditory meatus removed dust, microorganisms sluschen epithelium-tion and so on. Thus, using sulfur secretion glands carried ear toilet. Your concern - to remove the excess sulfur, which you can see. 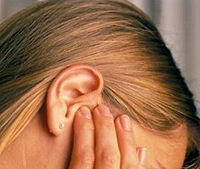 Remove sulfur you can use the clean fleece,wound on a match, and just outside the ear canal. Penetrate deeply cotton swab into the ear canal is strictly prohibited - you can injure the skin of the outer ear canal, which is very gentle, or damage the eardrum.

If you release the sulfur appear frequentlyare abundant, try every time after a bath (and washing of the head) to go to a hot water bottle on the ear - one, then another. Minutes ten-fifteen. Besides that you will help this cleansing usheye you have to carry out prevention of otitis; because otitis sometimes arise after swimming - when the dirty water gets into the ear.

If you already have and there were accumulations of sulfurcerumen, if there is confidence that the ear "laid" is due to the formation of sulfuric cork, and if you're in the eardrum no perforations, you can try to wash his ear alone - with a rubber balloon: one hand is necessary to delay the ear up and other - without entering the spout spray too deep, not strong jet to wash the ear canal. For washing, you can use, and clean water, and a weak solution of furatsillina, and infusions of herbs (chamomile, calendula, etc.). Water temperature (or solutions, infusions, decoctions) used for washing must be necessarily body temperature. If the water is cold or too warm, irritable vestibular apparatus and dizziness appear.

Why are there traffic jams

It has been observed that the process serootdeleniyaactivated in a few cases: after a bath (warm water washed the head, blood vessels are widened and sulfur glands react to this increased activity); as if in the ear fall dust, any other rubbish, insects; and sometimes - when ill middle ear. Cases of sudden emissions of sulfur, and if for no apparent reason. But when you consider that in the human body, this compact, well-tuned system, nothing happens just like that, without any connection with other processes, you can be sure - the reason is; but what we do not see, - our problems. Whatever it was, you should always pay special attention to the ears, if you noticed that the sulfur released active.

Sometimes it is not enough regularear cleansing, and deep in the ear canal is gradually formed cerumen impaction. In addition to the actual earwax, are in a traffic jam in a given amount of dead skin cells of the ear and dust. The tube can be almost black or dark brown; plug that in your ear for a long time, it becomes gray. sulfur clusters may be due to individual anatomical features (too curved or narrow external auditory canal), and the activation of the gray-separation process due to some reasons (for example, acute otitis media).

In any case it is recommended to see a doctor. If you can not get an appointment with an audiologist, you can try to "soak" sulfuric stopper 3% boric acid or a 1-2% solution of hydrogen peroxide: lying in the ear position up, you need to drip into the ear canal a few drops of the solution (three times a day), and still remain in this position for a few minutes, has had time to soak solution tube; followed by a turn to the other side and put under the ear, in which eyedrops, a warm heating pad - sometimes as a result of these simple actions Soaked sulfur passes itself. Also, to soften cerumen used soda-glycerol mixture, which is sold in pharmacies.