In this age of modern technology, when colorTVs, computers and other new items firmly hold its place in human life, especially not easy to have to color-blind. On the problems of perception of color-blind modern digital technology to tell the author.

Using computer terminology, it is possibleto say that the body of almost every person has a critical or non-critical bugs. Among the non-critical, but - alas! - Fatal refers blindness. Many have heard the joke about the light and the "light bulb at the top," but did not give the fact of the existence of color-blind special significance.

In fact, traffic is still a trifle compared withproblems that periodically arise in everyday life in a collision with a design developed by explicitly excluding the potential perception of color-blind. A few years ago I had the opportunity to work with youth computer magazine, which the designer for some reason liked to place pink text on a blue background or red to brown. However, the color-blind vision pink text on a blue background is perceived as a blank sheet, uniformly colored in gray-blue color. Fortunately for readers, this mess did not last too long.

Second example. Krasnoyarsk has very advanced cinema complex, which is touted as one of the best in Russia. Perhaps it is. But for color-blind buy a ticket at the box office of this institution creates a hefty challenge. Just something small nuance: gradation value places on the LCD-monitor, which informs the client about the availability of tickets for the session, for a color-blind are indistinguishable in color and blend with the designation of occupied seats. You come up to the window box office, the film and call session, the cashier displays the diagram of the hall and offers: "Choose a place." But how? They're all the same visually. Okay, I'm a man and it is held are not shy of such problems, but that teenagers or people experiencing a painful modesty, scary thought. Will they go back to the theater - the big question.

Strictly speaking, a movie theater in no way to blame. It uses the finished software product. Of course, the administration of a single theater could turn to the author of the program and the need to change the interface color solution. But the development of the product implies serious beta testing, including the convenience of the interface test. Do any of the testers did not even occur to him that interface a flawed?

A third example. Localized computer keyboard. I do not know what motivates designers to make Russian the letter is red. On the black keys are color blind are almost invisible! Choosing a new keyboard, I rejected some excellent options in the rest just because of the color of Cyrillic characters. With great difficulty I managed to find high-quality keyboard, in which Latin and Cyrillic letters are equally white. Fortunately, in recent years designers descended on the epiphany (or fashion so well matched), but the bilingual keyboard began to do without the red on black. Now alternative characters in most cases white or colored with blue additive. Thank you!

The problem of the perception of color interface solutionsprogram or product design is not as harmless as it may seem, but most often discussed only the psychological aspect of perception. Meanwhile, if we turn to medical statistics, about 8% of men and 0.5-1% of women worldwide suffer from color-blindness in one form or another. It would seem that this group is small. But ask any marketer, is it permissible to ignore the eight percent of the market? And not just to ignore, but to form a negative impression of your product? I think the answer is obvious - it is impossible, and serious developers understand it. An illustrative example of this - the color interface solutions MS Windows operating system and MS Office applications. What is the default color component prevails in the standard design of Windows, from the very first version? Blue. Now guess, what color is well seen almost all color-blind? That's right, too blue. For most users, a Windows installation limited color sensation default comfortable at the stage of installation. I wrote it and thought, I do not whether Bill Gates is colorblind?


Why there is color blindness

The official description of the limited academiccolor perception, as the visually impaired, there was a surprisingly late, although still Lomonosov in 1756, suggested the presence of light-sensitive eye of the three types of devices. But only in 1794, John Dalton (John Dalton) made a presentation on the partial color blindness, which he suffered. Interestingly, for the first time at Dalton I discovered the defect of completely random, in twenty-six years.

Knowing the basics of physics and understanding abouta digital camera device, the essence of color blindness understand even a schoolboy. As is known, any color can be represented as a combination of three primary colors: red, green and blue (RGB palette). Conversely, you can get detailed information about the color, knowing only the ratio between the three RGB components. The photographic and video equipment to do this, apply three independent sensing matrix provided with color filters. The human eye is designed sleeker, there are no filters selected. The role of the sensitive elements play a special retinal cells: three types of cones and rods. They are scattered throughout the retina evenly, like a mosaic. Rods are responsible for vision in low light conditions, without distinction of color. Therefore, "all cats are gray at night." For color perception responsible cones containing the light-sensitive pigment. If one of the pigments present in insufficient quantities, the perception of the corresponding color component is attenuated. The most common perception of a weakened red. Several less - green and red, and very rarely - blue. Finally, there are extreme cases where color vision is completely absent, and the person sees the world as black and white photo.


Programmers and colorblind - let's live together

The human brain has powerfulcompensatory abilities and tries to compensate for color vision deficiencies. This is facilitated by the fact that the spectral sensitivity of the eye area overlapped significantly. Based on existing knowledge about the world, the brain is able to largely restore the color picture by the "calculation".

Here is a simple but effective example: colorblind reduced perception of the red / green adjusts the white balance in color television. It is logical to assume that for the color-blind "white" is not the same as for a person with normal vision. But no, he adjusts the white balance correctly! The fact that he knows what it looks like white snow, white paper, white chalk ... The brain subconsciously and permanently fixes the signal ratio of the cone to the concept of "white." Probably at the same time involved and the luminance signal of the sticks, for the average person in the afternoon useless. Similarly, the brain learns to see the red blood and the red light, green grass and a green grasshopper, which it sits. Usually, they are seen not quite as full vision. But it is seen somehow different and at an acceptable level for daily life. But the brain is not limitless opportunities, and compensation has a limit. Sometimes it is physically impossible, such as when looking at the drawings polychromatic serving for vision testing, in particular, to diagnose color blindness. Drawings are made up of a set of different color patches, but the same brightness. This information is not enough to compensate for the subconscious, retinal rods can not be used, and colorblind sees a chaotic set of points. 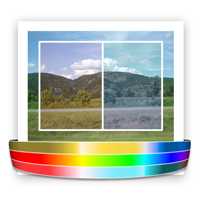 But when in a test to check the color sensationconverted to a corporate website, a window of the application program or a magazine page, it becomes sad. Bridge the gap between perception and color-blind person with a full color sensation helps special tools and plug-ins for graphics packages. Their little, and almost all are created by foreign developers. The only thing I managed to find online domestic, so it tests for color blindness in conventional polychromatic tables. But these signs are in any district clinic. In fairness, I note that many designers, truly professional, be sure to check the results of their work on the perception of color-blind. But our fellow programmers them without assistants. Probably it affects stitched genetically zakompleksovannost. We have always been ashamed to admit not only in its own small physical defects, but also to offer help to the needy. Simply pretend that there is no problem. On the other hand, if the problem does not say where the programmer needs to know about the present?

I'll try to explain what is really needed. There is a real need for a plugin that allows the designer to see the site developed "color-blind eyes." You need a tool that automatically analyzes the color scheme of the interface, logo, picture and warn about the presence of the author of colors, in which the perception of possible "failure", and / or unpleasant color combinations and indicate their location. You can develop a color corrector that works in the background and temporarily biasing color profile or substituting individual colors on the display screen, if the colorblind difficult to see some image or read the text on the site with a bad design. The same color correction, only in the opposite direction, will help most color-blind, working with a graphical editor, create a more appropriate image (although complete compensation is not possible).


Successes and failures in the treatment of color blindness

The ability to look at the eyes of the imagecertainly useful for color-blind. But it is much more useful than the inverse function - to make a distinct color-blind "problem" picture. After all, it will help such people do not feel discriminated against and self-fulfillment to the industry in which they want to.

Example: if you take a photograph of cells made by the electron microscope, the scientist-colorblind is not physically able to distinguish between the image the individual components of the cell structure. In practice, this means the professional inadequacy of the scientist due to physiological constraints, regardless of the level of intelligence and education. Sad, is not it? Nevertheless, minor subjecting image processing, it can be made quite readable and color blind. Here it is necessary to consider that in electron microscopy, imaging and many other fields of science and technology, which uses "synthetic" visualization, the absolute value of the color is not so important as the relationship between the measured value and is denoted by its color is rather conventional.

Attempts to compensate for color blindness usingcolored contact lenses or glasses with colored lenses have not been successful since they give only a simple image staining, excluding psychophysiology of color perception. Furthermore, to improve the perception pronounced effect it is necessary to turn to another color, lying in a different spectral region (for example, pink to blue), that can not be done using the filter. The use of colored filters for people with a limited perception of the red / green in most cases give unpredictable results, from a lack of useful effect and until the nausea and headaches.

Achievements allow electronics nowestablish corrective glasses with a tiny video camera, a computer image processing and display it on LCD-eyepieces. At first, such a device would be quite cumbersome, but after all, cell phones until recently were a little less than brick. In any case, there is a promising direction for the development of technology, it is claimed, and is unlikely to be abandoned. Wait and see. In color.