The intense pace of modern life, many hourswork at a computer, and daily leisure time in front of the TV screen will inevitably result in the patient receiving an ophthalmologist with complaints of blurred vision. What tips and tricks will give the doctor, it is not known, but the advertising promises miraculous healing with the help of laser correction. Is it so? 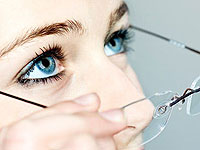 Laser vision correction - one of the mostmodern and popular methods for correction of refractive errors: myopia, hyperopia and astigmatism. The procedure aims to improve the quality of life of people with ophthalmologic problems. For vision correction today used by many, through various ways and means.

Some people are happy to eat in the forest blueberrieslarge quantities and are quite happy with the result. Others take multivitamin complexes and dietary supplements, noting a positive effect. Still others believe glasses or lenses are the ideal way to solve all problems.

But there is, of course, and those who are inclined to improve the quality of life by means of surgery. They report a significant improvement in the optical properties of the eye after surgery.

The issue of improving the quality of ophthalmologistsengaged at all times. But only in the second half of the XX century, with the development of science and high technology, a growing interest in this issue. Significant contribution to the study of the question made by ophthalmologists around the world, among them the Colombian Jose Barraquer, Svyatoslav Fyodorov, a Russian, an American Steven Trokel.

The world's first excimer laser surgery keratomasWe performed in Novosibirsk in 1988 under the direction of A. and B. Razheva Chebotarev. Today, it is simply impossible to underestimate the contribution of the Soviet and Russian ophthalmologists in the study of laser vision correction technology.

One of the great advantages of modern techniquesLaser vision correction - a high-tech equipment to achieve perfect surface of the cornea. Exceptional accuracy correction is expressed by the fact that after the operation the man clear, bright and contrasting sees things that are at different distances from the eye. The high quality of the reconstructed view is shown and the possibility of a great evening and night vision, minimal glare and bright circles around the bright light source. There is another advantage of laser vision correction: it is possible to correct the errors and corrections in the course of surgical intervention on other excimer lasers, or in the case of unpredictable events. 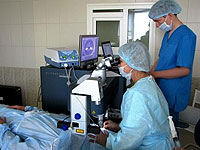 Keratokorrektsiya photorefractive (PRK) - atime-tested, and the results of laser correction method. The essence of the procedure is that the physician during operation forms a new surface of the cornea with an excimer laser. This high-precision ophthalmic intervention today is fairly rare, except in the case of a thin cornea.

The LASIK technology (the name was formed fromthe first letters of the English writing Laser-Assisted in Situ Keratomileusis) used microsurgical techniques and the impact of excimer laser technology. Using a special device, the microkeratome, allows you to work on the inner layers of the cornea. This is not affected by its upper layers, as is the case with PRK, and the average where evaporation takes place optically distorted portions of the corneal tissue with a laser beam. As a result, the cornea becomes individual optical parameters and vision is restored.

The safest and most popular operation today- SUPERLASIK, with which you can improve visual acuity for those who were previously contraindicated for laser vision correction. The cornea is also formed according to individual parameters.

It is worth noting that at the age farsightednessToday both eyes treated with PRESBY-LASIK procedure. After surgery the patient equally well captures the look on near objects with both eyes and get a clear image of distant objects. 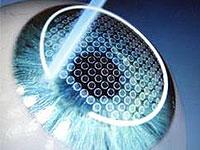 LASIK method - the most high-techOphthalmic surgery restore vision using a computer program and the necessary preliminary diagnostic examination. But she is not only evidence but also contraindications.

Unfortunately, there is a whole category of patients,that such a simple procedure is contraindicated. A number of serious chronic and inflammatory diseases not allow for laser vision correction. A significant danger is posed by diabetes in severe form, the visual system diseases such as keratoconus with thinning of the cornea, cataract, glaucoma, progressive myopia or above has the operated retinal detachment, dystrophy, corneal degeneration, changes in the fundus of the eye and other eye problems.

Given the risk hardly specialistrecommend surgery, unless there are specific indications for it. As with any surgical intervention, during laser vision correction LASIK method carries its own complications and long-term consequences, both during the operation and in the early or late recovery stage. It can be keratoconus, keratoconjunctivitis sicca, fluctuations in visual acuity, foreign body or liquid under the cornea, floater, erosion and other epithelial tissue.

Laser vision correction has acquired myths ascobwebs. Looking at the rich and famous, who are just like us, wear glasses, we begin to question: is it worth? We'll have to make a choice: the image or good vision, a beautiful setting or pay for the operation. Why is the richest man in the world Bill Gates wears glasses? I would like to think that he is able to pay for this procedure. The decision depends on the individual preferences and overall health.