Who are guide dogs? How is the training of dogs for the blind? The answers to these questions can be found in the article.

Lieutenant colonel
Airborne retired George Khudyakov can not live without a dog.
After Chelyabinsk Automobile Institute in 1972, he
served in different parts of the country, I was in Afghanistan. Married. It
like life is just beginning, but in 1985 George V.
cold and sick. Because of the strong supercooling first he
I stopped seeing one eye, and a year later the second.

- For me it
it was a terrible blow, - says retired lieutenant colonel. - I've been
I lay in the hospital, so there is hardship that still can not stand
hospitals. When my family moved to Chelyabinsk, wife decided - we
You need a guide dog. So in our house there was a first
Alsatian Linda.

But he lived in the family pet
Khudyakov short, the dog got cancer and died. Georgy
He is still experiencing the death of his favorite, because Linda helped him
I feel like a complete human being.

- It was great
guide - says Georgy. - I'm not afraid to go with it
outside. When the shepherd died, I thought I would no longer be able to make
dog, but need I made.

After Linda's family Khudyakov was another dog, but she lived only three months, the owner does not even remember her nickname.

Now
I have disabled the first group of visually impaired live eight black labrador
Lupin. The dog never for a moment does not depart from its owner, the dog is replaced
his ears and eyes.

- Unlike Linda Lupin very calm
dog, - said Georgy. - Though I do not see him, but I
I think he has kind eyes. Lupin helps me in everything. One time I
got out of bed and he could not find slippers, Lupin brought them to me,
even helped his muzzle put on them. Another was the case: in the street I dropped
glasses, looked for a long time, could not find, and found the dog and gave them to me. I
I want to say that such methods in canine service is not taught.
Lupin - ideal dog, I could not do without him, and the two steps.

If
police dogs are taught to be evil, it must be good seeing eye. A
Lupin sometimes even uses his kindness to beg guests
who come to visit Khudyakov, something tasty.

- Georgy, and as you walk with the dog, for example, in the pharmacy?

- Blind with a guide dog must pass all the institutions -
Khudyakov says George. - There is a law, but that's why some of
I know this is not all. At the pharmacy I walk quietly, no one to me, and the word is not
will tell, but in the shops and hairdressers, is, and is not allowed. One
time I was not allowed into the store, I left my dog ​​in the street, so at
I stole it. These dogs are very expensive. Actually, I want to say that
for a blind person guide dog - is not only a support in life, but
and even a real true friend. 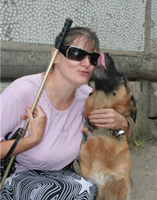 Training
It is, taking into account characteristics of the disabled, which is designed to
the dog, and the selection of a pair of "man - a dog" takes place at an early stage
animal training.

- For every disabled person is filled
profile, - says the chairman of the Chelyabinsk Regional Society
Blind Tatyana Savitskaya, - on the basis of which the dog is selected and
her training is based. Today, the problem of training guide dogs
for blind people it is urgent. In our town only two such
trained dogs, and on the field - six. We tried with
chief of the private police dog service area
Michael Sagakonem organize the training center of
pets conductors, but our plan did not materialize - due
large financial costs.

Yearling
puppies pass a veterinary inspection, and then for two weeks
Instructors monitor their behavior: watching the reaction of pupils on
cats and other dogs. Also check to see if the dog distracted by
proposed foreign food. The selection criteria are very strict, as by
this future security depends on the dog's owner. With instructor
the dog learns to walk in a straight line, ignoring distractions,
indicate obstacles. Also, the animal begins to understand the team
"Stop", "forward", "right", "left", "quieter".

The cost of a guide dog

Trained
dog may already own to drive the host: to bypass obstacles,
maneuver in the crowd, to avoid collisions with blind branches
trees, travel to public transport, trains and
etc.

Quadruped guide taught to memorize routes to it
able to work from memory, as well as to analyze the situation and take
the right decisions.

In addition, a dog is undergoing
obedience, including an understanding of commands "sit", "down", "stand"
"Place", the supply dropped by canes. Training ends with an exam.
Transfer guide dogs with disabilities takes place in the heart of the training
dogs. Prior to this, people with disabilities are
a two-week training in collaboration with future pets. Then
pass the tests receive veterinary passport on an animal.

- K
Unfortunately, in Russia are preparing a professional guide dogs
Only in the village Kupavna Moscow region, - says Tatiana
Pavlovna. - People with disabilities to get a dog, you need to pay
rather big amount. We, of course, for its part help the man,
We pay him a trip. And all the other costs borne by
blind. For example, the cost of the puppy - 15,000 rubles, plus the same amount
you need to pay for the dog training.

The number of lessons per
Reception - 5, one lesson - 3 hours, the cost of one hour of training -
$ 100, the total number of training is 40 days, plus more
Accommodation in the Dog Training Centre. It is so little in our city
pets conductors. We would very much like to see in this
metropolis, finally, organized a service that would prepare
guide dogs.

And we must not forget the blind children. In
Most parents do not have enough money to buy such a child
four-footed friend, which is a pity. I believe that the dog will not only help
child fearlessly to move, for example, in the yard, but it will help
child liberated and not withdraw into themselves.